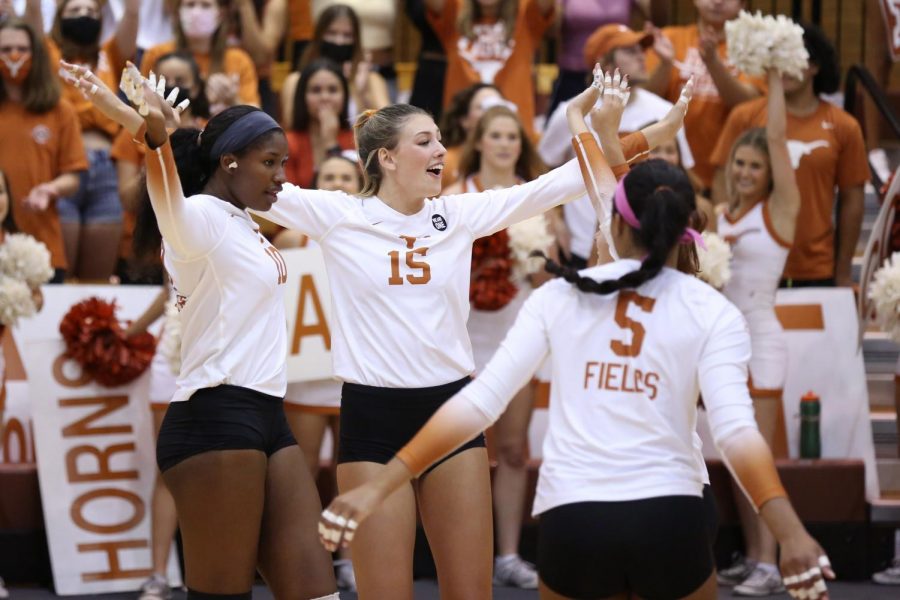 The Cyclones kept some of Texas’ stars at bay early, minimizing the play of juniors Skylar Fields and Logan Eggleston, who usually lead the team in kills. But Iowa State underestimated Phillips, who often plays a supporting part for the team. Tonight, Phillips held a .500 hitting percentage with nine kills and six blocks.

The Longhorns took away a 3-1 victory in their first match against Iowa State after a solid start by the unranked Cyclones.

Texas looked unsettled in its first set. Iowa State started off the game with a service ace, and the Cyclones’ Kenzie Mantz sent six kills toward Texas through the first set. The Longhorns experienced technical issues on their side of the net, with five service errors and six attack errors.

Despite a pair of service aces by sophomore Melanie Parra and two blocks from senior Brionne Butler, Texas didn’t work its way to a lead until 21-20. The surge came too late for the Longhorns, and Iowa State pulled out a 26-24 win in the first set with a final kill by Mantz.

But as the Longhorns entered their second set, they forgot the issues holding them back minutes before. Texas took a 7-1 lead early, with Phillips taking charge. While the Cyclones partially shut down Eggleston and made it a quieter night for Fields, Phillips hit eight kills in the first two sets and had four blocks. Her play led the Longhorns towards a 25-16 victory in set two.

Although Phillips often plays a quieter role on the court, she is ranked third in the Big 12 for her .379 hitting percentage. Elliott calls her the glue to the Texas team.

The court opened up for Texas in set three with Parra’s series of strong serves that led the Longhorns to a 25-14 victory. But the surprising element for Texas came in a strong defensive game, putting up a total of 17 blocks during the match thanks to Phillips, Butler and junior Asjia O’Neal.

Texas finished the game in completely different fashion than it started, with serves, blocks and kills working together for a 25-12 victory. Despite a shaky start, the Longhorns became unbeatable as they found their rhythm.