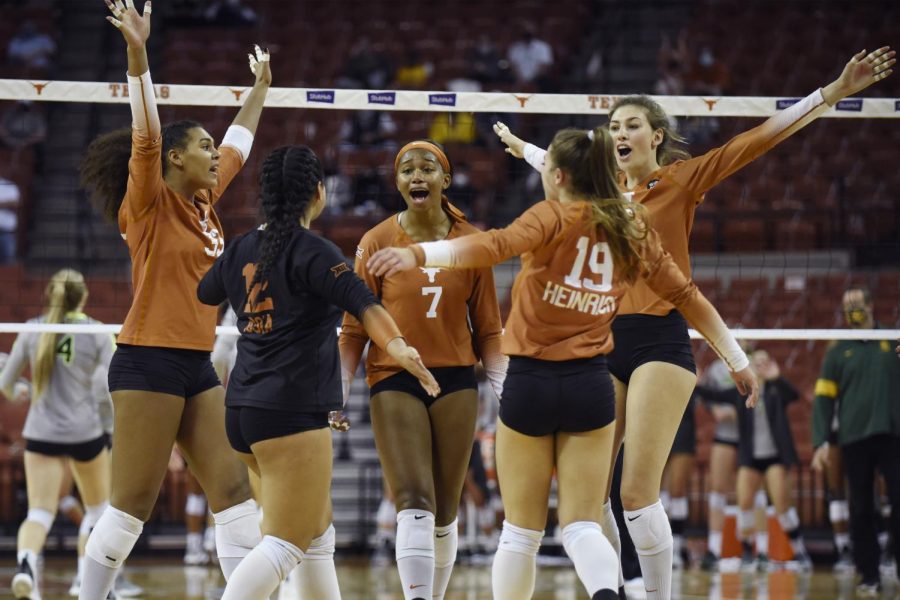 If the Longhorns’matchup against Iowa State has taught college volleyball fans anything, it is that Texas can dominate from both sides of the ball.

In Thursday night’s match against the Cyclones, the No. 1 Longhorns put on a flashy defensive performance, recording a season-high 17 blocks and holding Iowa State to a .000 hitting percentage. Texas continued its defensive hot streak in its 3-0 sweep at the Hilton Coliseum in Ames, Iowa, finishing the match with 12 blocks and 49 digs.

Although the Longhorns are known for their assertive attacking and serving, they have been able to win tough road games through the front row getting points off blocks. As Texas learned last season in its National Championship loss to Kentucky, offense wins games, but defense wins championships. It is clear that the Longhorns have made significant strides to be more well-rounded on the dig and the block.

In the first set, Texas found themselves at the mercy of a fiery Iowa State front row. The Cyclones dished out tough attacks targeted at setter Jhenna Gabriel to keep the Longhorns out of system, building a 4-0 scoring run to lead the Horns 8-3 early.

The Longhorns quickly found their footing following a couple of clutch blocks by middle blockers Brionne Butler, Molly Phillips and Asjia O’Neal. The defensive plays at the net kindled an offensive spark for Texas, allowing juniors Skylar Fields and Logan Eggleston the ability to sink impressive cross-court attacks in an eight-point scoring run.

To secure the first-set win, the Butler-Phillips duo documented their second tandem block of the set, improving the Longhorns 1-0 to start the match.

A large contributor to Texas’ defense against the tough-serving Cyclone team was libero Sydney Petersen. In her Iowa homecoming, the senior from Dike, Iowa, often found herself pancaking and diving to keep plays alive. The libero duo of Petersen and sophomore Nalani Iosia contributed a combined 16 digs on the night.

O’Neal also impressed in her defensive play versus the tough Cyclone front row. While the middle blocker didn’t perform with her typical offensive efficiency, she recorded a personal best of nine total blocks in the sweep.

With Texas’ 17th consecutive win of the season, head coach Jerritt Elliott became the winningest coach in Texas volleyball history with his 523rd win. He surpassed Mick Haley, who served as head coach from 1980-1996.

The Longhorns hope to continue their defensive prowess and stay undefeated in their next match against No. 11 Baylor on Nov. 5.