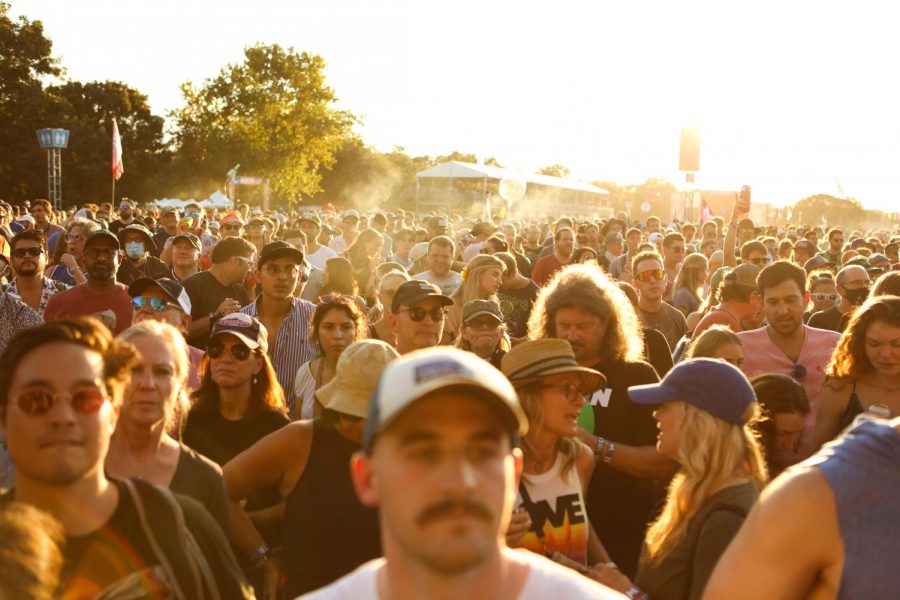 A crowd gathers at Weekend 1 of the Austin City Limits Music Festival on Oct. 1.

With almost a dozen acts cancelled Friday morning due to rain, ACL 2021 started off slippery and muddy. Still, a crowd of hundreds burst into the gates at 3 p.m. to kick off a memorable weekend. More people arrived the next day covered in glitter and dressed in cow print, ready for a stacked Saturday lineup. Sunday came with rescheduled acts from Friday and big crowds fighting the heat.

To make sense of all the commotion, The Daily Texan compiled a list of some of this weekend’s best performances.

During his Friday set, Finneas debuted a new song from his upcoming album. After expressing his aversion for SB8 — the abortion bill — he announced his festival paycheck will go to Planned Parenthood of Greater Texas. The singer also played guitar on stage with little sister, Billie Eilish, during her Saturday night headliner set, owning the weekend.

Dressed in a bright pink bodysuit and knee-high stiletto boots, the singer played songs from her most recent album and even her 15-year-old iconic hits from her time at Disney. As rain drizzled down on Zilker Park, she played her 2009 hit, “The Climb” and the crowd echoed every word.

Singing covers of songs by Blondie and Janis Joplin, the rock queen kept the crowd engaged and showed off her musical versatility. Embracing the Texas spirit with her big hair and pink cowboy hat, Cyrus threw a Texas-sized party for the Honda Stage as Friday’s headlining act.

17 and mighty, up-and-coming rapper Payday kicked off Saturday morning on the Miller Lite Stage. Dressed in a pink button down and matching shorts which repeated her name, at first glance, the fresh artist seems meek, but when she starts singing, fans can’t help but jump along with her, drowning in her high energy and explosive vocal control.

Fake botanicals sprawled across Ladybird Stage on Saturday evening as Doja Cat took the festival to Planet Her. With each slight shift of her hips, Doja gave the crowd an intimate performance and kept all eyes locked on her. From a streamlined version of “Kiss Me More” and a mental rendition of “Say So,” even ardent fans of the rapper found refreshing moments in her set.

Headlining Ladybird Stage on Saturday night, Eilish wowed the vast crowd with songs from her first EP and following albums. With a simple stage set-up full of billboard sized screens, Eilish put on a production of light variations and visually intriguing videos.

Halfway during the performance, the screens broadcasted the words “Bans Off Our Bodies” in reference to SB 8. The singer then put her middle finger up to the sky and led the crowd in a chant of “my body, my choice.”

The most surprising act of Sunday, Greta Van Fleet, rocked Ladybird Stage. From killer guitar solos to incredible drum solos, the band showed off their impeccable artistry. As the sun set on Zilker, stragglers across the park walked in to listen to their spunky rock music, drawing a massive crowd.