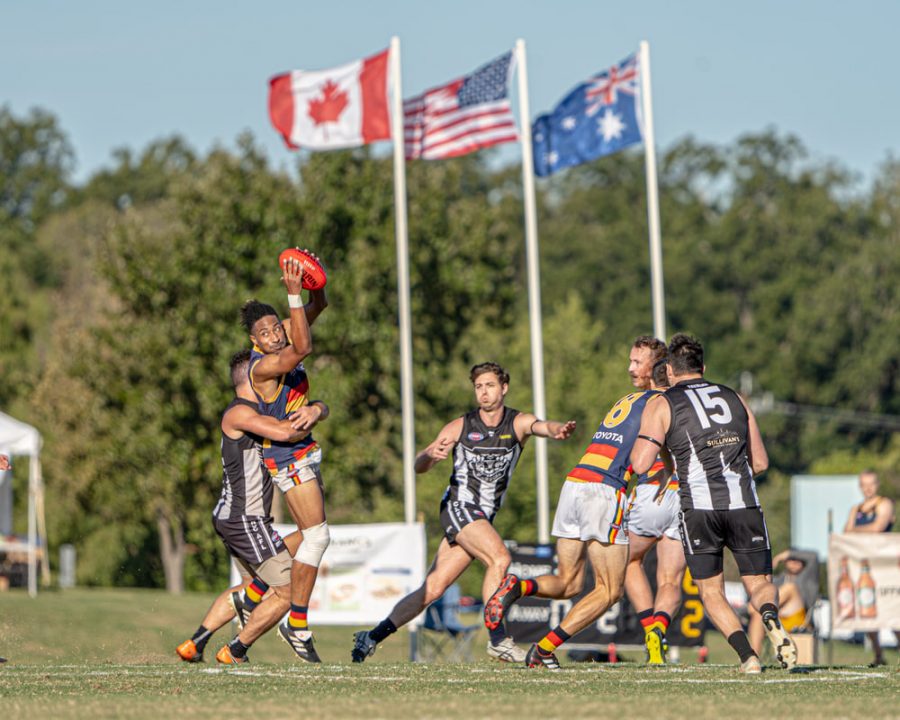 Over 9,000 miles from where the game originated, Austin’s Onion Creek Soccer Complex hosted the United States Australian Football League Nationals this past weekend. The USAFL is an amateur Aussie rules football league dedicated to the promotion of the sport.

Ben Carpenter-Nwanyanwu, a player for the local Austin Crows, was a recent college graduate when he first stumbled across  people playing Australian football at Zilker Park in 2013 . He has played in the USAFL every year since.

“When people ask me what Australian football is, I say it’s kind of a combination of everything you’ve ever probably enjoyed before,” Carpenter-Nwanyanwu said. “(It’s) a combination of soccer, basketball, American football all put into one and add an underhand volleyball serve as the main way to pass the ball.”

Australian football, commonly referred to as “footy,” is a sport played between two teams of 18 players on a large oval field. Players score by kicking the ball between the middle goal posts (worth six points) or between a goal post and an outer “behind” post (worth one point).

Over 30 teams across the country and over 1,000 footy players competed at the 2021 Nationals in Austin, making it the biggest Australian football tournament in the world.

In his time with the Austin Crows, Carpenter-Nwanyanwu has seen the number of players in the organization double. The Crows enjoyed dynasty-level success during Carpenter-Nwanyanwu’s stint in Austin, winning six USAFL National finals, including the 2021 Nationals.

“There’s a lot of people who are here from Australia, thousands of miles away from their friends and family, and they’ve been able to build a whole new group of friends and family here, which is amazing,” Carpenter-Nwanyanwu said. “You can tell that builds on itself with the numbers we continue to have.”

During the two days of the Nationals tournament, the setting at the Onion Creek Soccer Complex was reminiscent of Australia. Besides being surrounded by multiple games of footy, attendees enjoyed different Australian snacks and beverages. The Australian flag flew in the middle of the park as well.

With the USAFL being a non-profit, the league relies on volunteers to run the annual Nationals event. Cari Greving, who first volunteered at the 2017 Nationals in Wisconsin, does a little bit of everything at this event, including driving injury carts, giving out uniforms and tearing everything down.

“Every single year, Nationals is like a family reunion,” Greving said. “These people have been doing this for a really long time.”

In an effort to continue the growth of the game in the United States, the USAFL launched its “Play On” foundation in 2020. The foundation’s mission is to provide financial assistance for the league so it can have stability for years to come.

To celebrate the 25th anniversary of the league, the foundation, which relies on pledges and donations, hopes to have raised $2.5 million by 2022.

“What they want to do there is pretty much spread the word, get the game out there, start kids clinics,” Greving said. “You can always support a nonprofit that’s doing something good in the world which is making a popular sport somewhere else, popular in the United States.”