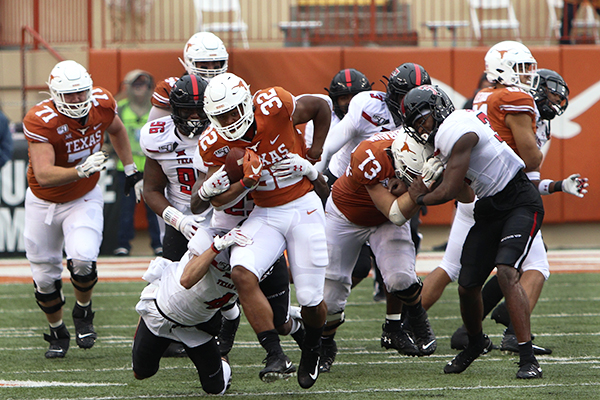 If recent history has any say in the matter, Longhorn fans should brace themselves for the performance of the Texas defense this weekend.

Since Texas Tech and Texas’ first meeting in 1928, the Longhorns have won 51 of 66 games against the Red Raiders. But even more predictable than the outcome has been the high score, with the exception of 2017, when Texas lost to Texas Tech 23-27 — an offensive showdown.

The teams have scored an average of approximately 80 points combined in their last five meetings. Neither program has scored below 20 points since 2014, when Charlie Strong was in his first season as the Longhorns head coach. In the Tom Herman era, the trend continued with Texas scoring over 40 points in its past three games.

Now, with new head coach Steve Sarkisian at the helm, few players will remember the Longhorns’ 2017 loss. Even fewer will remember a low-scoring game against Texas Tech. But almost all will remember last September’s game, when both teams put up numbers into the 50s.

Texas and Texas Tech reached new heights in their annual offensive showdown last year, when the teams extended the game into overtime and, together, scored 119 points.

The game began with a strong showing by the Texas offense, which would prove necessary to putting up an offensive fight against Tech. The Longhorns executed a clean 5-minute drive to start the game, leading them to the Raiders’ 2-yard line. Quarterback Sam Ehlinger found his way into the endzone to put the first six points on the scoreboard.

But the series became complicated through a slew of missed tackles by Texas, allowing Tech to tie up the game two minutes later. By the end of the first quarter, the Longhorns found the endzone twice more to put the Horns up 17-7.

All the while, defensive issues plagued Texas. At the beginning of the second quarter, the Red Raiders’ KeSean Carter caught a 22-yard slant pass to the 10-yard line, where another missed tackle allowed him to find a pathway into the endzone.

By the time players headed for the locker room at halftime, Texas led Tech 31-21.

In the third quarter, the Longhorns defense forced the Red Raiders to punt. But as Tech punted the ball away, it bounced off the hands of defensive back D’Shawn Jamison into the grasp of Tech’s Xavier Martin. The Red Raiders found the endzone for another six points.

Less than two minutes later, special teams went awry again, this time in Texas’ favor. The Longhorns blocked a punt from Tech, which sent the ball skipping into the endzone. Then defensive back Jahdae Barron snagged it from the air.

The scoring fest continued into the fourth quarter, when Texas found itself down 15 with only three minutes remaining. But in approximately 30 seconds, the Longhorns found the endzone. Then, with just 40 seconds left in the game, they scored again. Tech and Texas would find themselves battling it out at 56-56.

In overtime, the Longhorns scored on a connection from Ehlinger to wide receiver Joshua Moore. The defense proceeded to take the field, where on 4th down and an impressive defensive stand, Texas safety Caden Sterns picked the ball, dashing the Red Raiders’ hopes.

History in the Making: