Keys to the game: Texas versus Rice 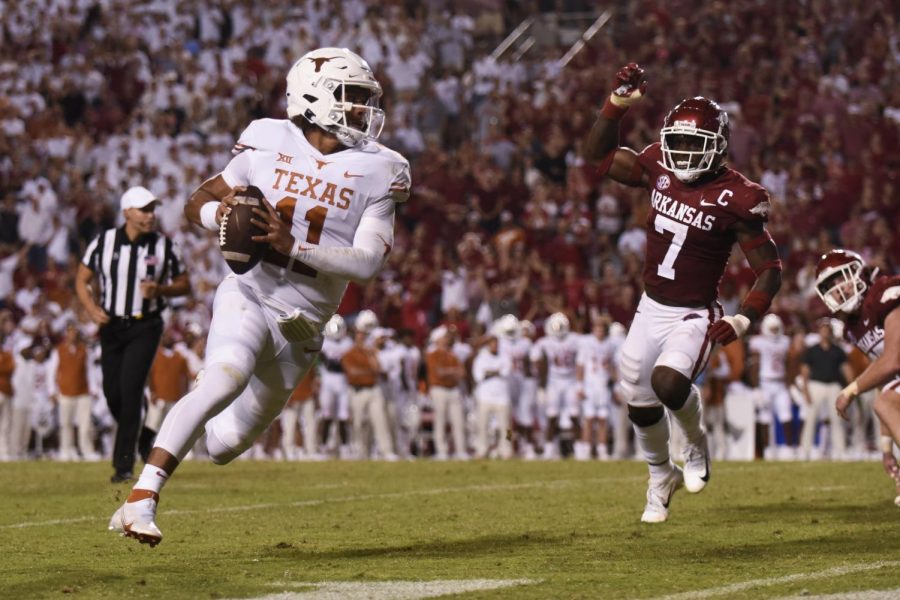 If the Longhorns merely scratch the surface of their potential on Saturday night, Texas beats out Rice.

One-win Texas — which fell out of the AP Top 25 following a crushing loss to Arkansas — will play host to 0–2 Rice at Darrell K Royal-Texas Memorial Stadium. The Owls are in search of their first win in Austin since 1965, and their first win over the Longhorns since 1994.

Rice is winless heading into its Week 3 matchup with Texas, following losses to both Arkansas and Houston. The Owls were outscored 82-24 over the two-game span.

Part of the reason for Rice’s poor start is due to a  quarterback dilemma — similar to that of Texas — with neither redshirt sophomore Wiley Green nor redshirt freshman Luke McCaffrey taking the starting job by the scruff of the neck.

Green, who is more experienced under center, received the approval to start against Arkansas, but was benched during Week 2 after completing less than 50% of his passes and throwing three interceptions. McCaffrey — Green’s replacement against Houston and the brother of NFL star running back Christian McCaffrey — also failed to complete 50% of his passes and, just like Green, threw three interceptions.

Yet, Rice head coach Mike Bloomgren named McCaffrey the starter on Tuesday. Texas’ defense should be licking its chops going up against the freshman who has only completed 14 of his 29 passes on the season.

It’s not just the defense that is poised to have a tremendous game for the Longhorns. Sophomore running back Bijan Robinson is also likely to have himself a game against an Owls defense that has given up seven rushing touchdowns in Rice’s  past two games.

Robinson hasn’t reached his monstrous potential yet this season, due to poor performances by the Texas offensive line against Louisiana and Arkansas. Yet, Robinson has two rushing touchdowns and one receiving touchdown to his name this season. Against a team like Rice, No. 5 will run rampant.

Playing against Rice, Texas’ other offensive weapons — freshman wide receiver Xavier Worthy, sophomore wide receiver Jordan Whittington and junior wide receiver Joshua Moore — could kick-start their seasons. Whittington had a phenomenal Week 1, but endured a few disappointing drops in Week 2, not looking himself. Look for the slot receiver to bounce back in a big way Saturday.

Projected to be the go-to receiver for the Longhorns this year, Moore has been anonymous. The wideout has only made three catches for 17 yards as he heads into Saturday’s matchup. Look for Moore to break out against the Owls as junior quarterback Casey Thompson finds him in the air.

Perhaps, one reason for Moore’s suboptimal start to the season and Whittington’s poor game in Arkansas, is the Texas quarterback situation. Head coach Steve Sarkisian announced Monday morning that Thompson would start against Rice. Thompson under center could spell good news for the Texas receiver core.

No matter who stands as the answer for Texas at the quarterback position, Thompson should be expected to prove his dominance over redshirt freshman quarterback Hudson Card in the pocket. During the last meeting between the two teams, former quarterback Sam Ehlinger produced over 200 yards and found the endzone three different times to give Texas a hefty advantage on the board. When Texas was in a comfortable position to secure the victory, Ehlinger went out and Thompson went in.

Expect Thompson to show off his arm, poise and athleticism as he guides the Texas offense down the field. If Saturday’s game is any reflection of the 2019 matchup, Thompson will likely come out of the game when the Longhorns are in a comfortable position facing an Owls defense that has given up nearly 200 yards a game in the air. Card’s opportunity to take some snaps for himself is an opportunity that will not be wasted.

With Texas’ hopeful newfound motivation after last week’s grueling loss in Fayetteville, the Longhorns should have an advantage over the Owls to fight even more. When Texas takes the field on Saturday night, Sarkisian, Thompson and the Longhorns should be unstoppable in Week 3.