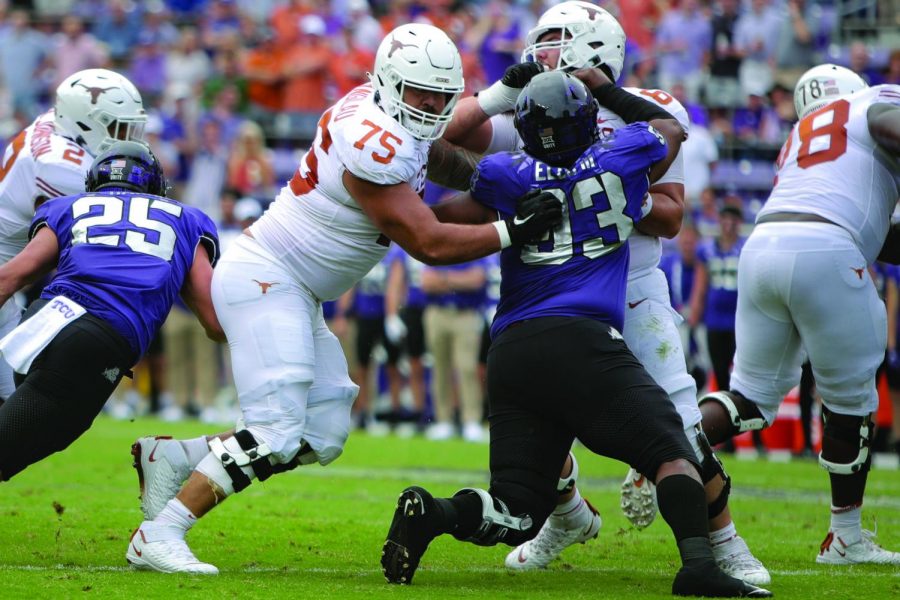 The redshirt junior quarterback took his offensive line out to a steak dinner at Vince Young Steakhouse last week.

“I just think if I’m spending a lot of time with my running backs and receivers, watching film and hanging out with those guys off the field, just taking the linemen out to eat is something that could be really special for our continuity and our chemistry,” Thompson said. “Also, those guys, they need to eat.”

Look no further than the woes of Clemson or the No. 6 Sooners, who lost several experienced offensive linemen to the NFL, including starting Kansas City Chief center Creed Humphrey, the 63rd pick in the NFL draft.

With young offensive lines, the two perennial college football powers have struggled to replicate previous offensive proficiency: the Sooners rank 43rd among FBS teams in total offense after ranking 11th and 3rd in 2020 and 2019, respectively.

Junior defensive tackle Moro Ojomo will line up against a Sooner not named Creed Humphrey for the first time in his Texas career.

“They’re a young bunch, it’s a new crew,” Ojomo said. “So it’s going to be interesting to go versus them and get a feel for a new offensive line.”

Texas’s own big men up front will face their own challenge. The Longhorn offensive line struggled mightily in the loss against Arkansas. The unit has since strung together three impressive run blocking games, leading to an average of 345 yards rushing against Rice, Texas Tech and TCU.

Head coach Steve Sarkisian praised the line’s ability to get to the next level in the run game and said he’s seen improvement from everybody on the five man front.

But against TCU, left guard Denzel Okafor suffered a leg injury and Sarkisian said Monday Okafor is out for the season. Losing the sixth-year guard means another vet, fifth-year offensive lineman Derek Kerstetter, will move to left guard and fill in for Okafor while redshirt freshman Andrej Karic takes over for Kerstetter at right tackle.

Thompson said he also invited Karic, the “sixth man” of the offensive line, to the steakhouse dinner. He wants to treat his offensive line out to eat regularly and said he plans to switch it up to keep them on their toes every week.

Soul food is likely on the menu next week, Thompson said. But the days of expensive steak dinners are in the past.

“I let them order what they wanted to,” Thompson said. “I kind of wanted to impress them a little bit for their first dinner, but every week won’t be that expensive.”