Longhorns in the NFL 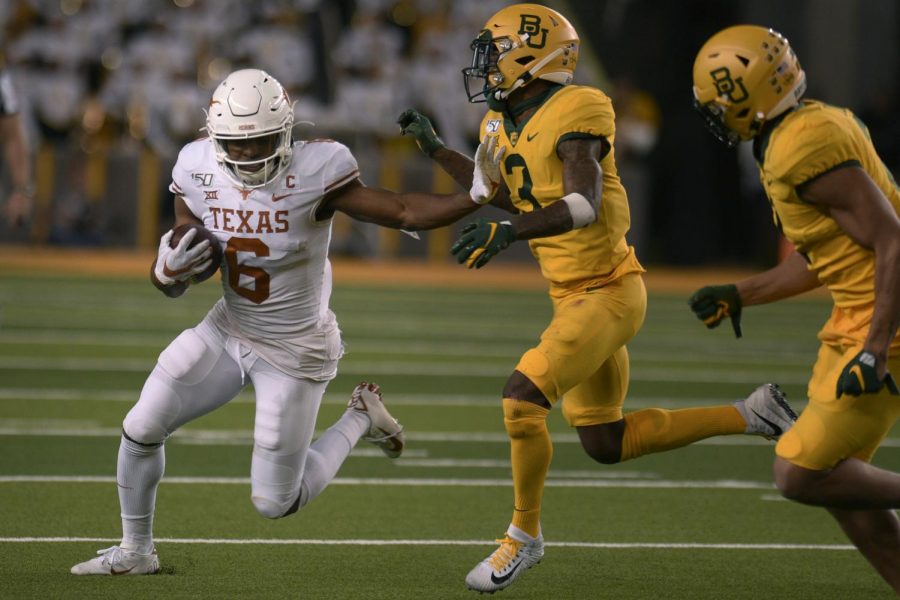 Week 2 of the NFL season featured a handful of Longhorns who shined on both sides of the ball, putting the Texas name in the ears of millions of NFL fans on Sunday.

Former Longhorn Devin Duvernay played a key role in the Ravens’ eventual victory over the Kansas City Chiefs, which boasts one of the best offenses in the NFL. The second-year receiver kicked off the Ravens’ win with an impressive athletic display and effort that contributed to a huge momentum shift.

The Chiefs scored quickly after a pick-six by Tyrann Mathieu, but Baltimore fired back, reaching the red zone in a less-than-two-minute drive. The Ravens punched it in with running back Ty’Son Williams on first and goal, but a hit by a Kansas City corner jarred the ball loose from Williams and nearly led to the Chiefs taking over. Then, in immense traffic, Duvernay plucked the ball out of the air and trotted into the endzone resulting in six points on the board for the Ravens. In a game that came down to the wire, without Duvernay’s play, Baltimore may have endured its second turnover to start the game and its second loss of the season. Instead, Baltimore knocked off the defending AFC champs in a Sunday night thriller.

On the defensive side of the ball in Sunday night’s AFC showdown, DeShon Elliott represented the Ravens along with Duvernay. The former star safety for Texas left the game at halftime due to a concussion diagnosis, but his performance in the first half was nothing short of a success.

Stat sheets show Elliott ended the game with three solo tackles on a future hall of fame quarterback, but his performance went beyond a hodge podge of numbers on a stat sheet. Elliott faced the daunting task of keeping some of the NFL’s best –– Patrick Mahomes, Tyreek Hill and Travis Kelce –– at bay. Elliott and the Ravens defense succeeded at pressuring the Chiefs offense. On a crucial third down in the second quarter, Elliott came blitzing off the edge, forcing Mahomes to scramble in the pocket. Mahomes had no other choice but to throw the ball away. Kansas City was forced to punt, and Baltimore responded with a touchdown. The Baltimore defense, with Elliott’s help, held Hill to just three receptions and 14 yards, proving crucial to Baltimore’s win. Elliott will now enter concussion protocol and his availability for Week 3 is up in the air.

Dallas ran rampant during the Cowboys’ visit to California to face the Los Angeles Chargers, and former Texas guard Connor Williams played a key role in the trenches.

Jerry Jones’ beloved franchise ran for nearly 200 yards on the Chargers’ defense. Williams is working to become one of the best on Dallas’s already star-studded offensive line, and he dominantly proved that on Sunday. The fourth-year guard didn’t allow a single pressure against the Chargers and is yet to allow a pressure or sack this season per Pro Football Focus. Behind Williams’ and the rest of the line’s performance, Dallas running backs Tony Pollard and Ezekiel Elliott combined for 180 yards on the ground and quarterback Dak Prescott had plenty of time in the pocket, leading to a Cowboys win. Williams has the potential for a breakout season to make Dallas’ offense even more potent than it already is.

While the Seattle Seahawks lost to the Tennessee Titans in a close game, Seattle’s Quandre Diggs proved he’s among some of the best safeties in the league. The former Texas corner-turned-free safety displayed his tackling ability in Sunday’s loss. Diggs finished second on the defense with 10 total tackles and tied for the team’s second-best five solo tackles — both behind Bobby Wagner. The strong effort from Diggs wasn’t enough, however, to give the Seahawks a home victory. Tennessee’s offense proved too powerful for Seattle on Sunday, and Diggs looks to only improve his performance in this week’s Sunday afternoon matchup against the Vikings.