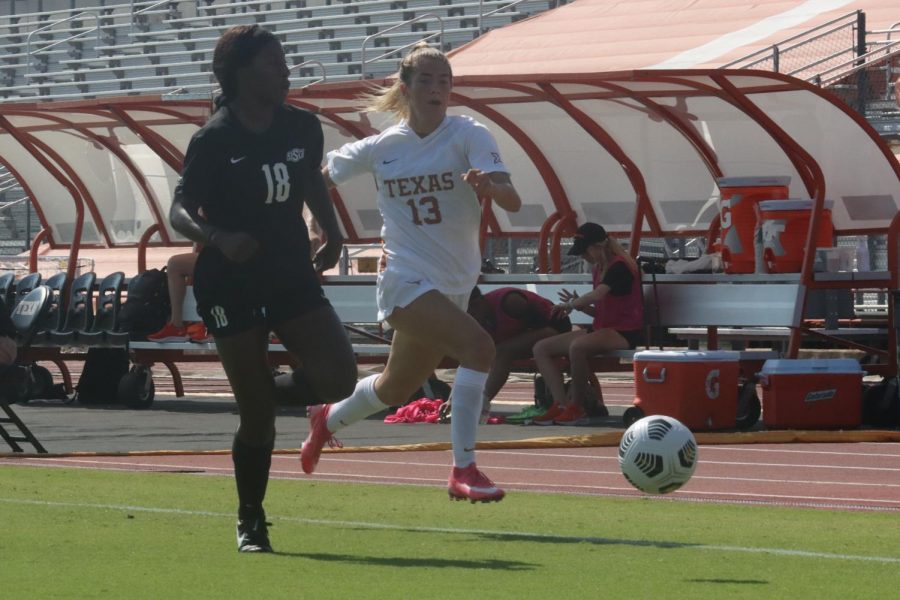 The mood surrounding the Texas soccer team Sunday was even more jovial than usual, and it wasn’t only because the Longhorns extended their unbeaten streak to 11 consecutive games, the second longest unbeaten streak in program history.

Texas celebrated Senior Day and highlighted the team’s graduating players. With “We Are Family” by Sister Sledge playing over the stadium speakers, eight Longhorns were acknowledged for their contributions to the team, both on and off the field. Fittingly, given the song choice, their families came into town to celebrate with them.

“This is such a tremendous group — they’ve definitely left their mark on the program,” head coach Angela Kelly said. “Any time you can send the seniors off with a W, it’s always great.”

Senior forward Mackenzie McFarland made her Senior Day even more memorable by scoring her first two goals of the season to lead Texas over the Oklahoma State Cowgirls 2-1.

In the second minute, freshman forward Trinity Byars passed the ball to McFarland, who had her back to the defender on the right side of the goal box. Pulling off a move that would’ve made Hakeem Olajuwon proud, McFarland feigned left before quickly turning right with the ball, giving her the necessary space to punch the ball through the left side of the net with her right foot. Byars was credited with the assist.

In the 54th minute, the Texas offense was in transition. Running down the middle of the field, freshman midfielder Lexi Missimo received a cross from the left. The Oklahoma State goalie was able to deflect the ball from the goal, but McFarland was in the perfect position to send a header into the net.

The game with the Cowgirls was unusually chippy. Junior forward Teni Akindoju received a yellow card in the 44th minute. Oklahoma State and Texas were assessed seven and eight fouls, respectively.

Head referee Andrew Musashe stopped the clock multiple times to talk to players and appeared to get more animated as the game progressed. In one particular instance, sophomore defender Lauren Lapomarda was given a stern talking-to after attempting a throw-in farther up the field from where the ball had gone out.

Kelly was unconcerned about the officiating.

“I thought (Musashe) did fine,” Kelly said. “There are all moments of gamesmanship. As long as there’s clear communication, that’s fine.”

Senior All-American midfielder Julia Grosso and freshman midfielder Amelia Abbott will be returning for Texas’ last regular season game against the 7-10-1 Kansas Jayhawks on Oct. 28 after playing for their international teams for the past week.

Three days after, the Big 12 Championship will start, taking place from Oct. 31 through Nov. 7. One day after, on Nov. 8, the Longhorns will find out if their efforts this season have been enough to earn a spot in the NCAA tournament.

With one game left in the regular season, the Longhorns are not overlooking the Jayhawks.

“We’re going to pour our hearts and souls into that game,” Kelly said.

And what is Texas going to do tonight to celebrate Senior Day?

“I know that all of their families came into town, so this is the evening where they get to have their parents take them to really nice dinners,” Kelly said. “I think it sounds like a lot of steak dinners.”