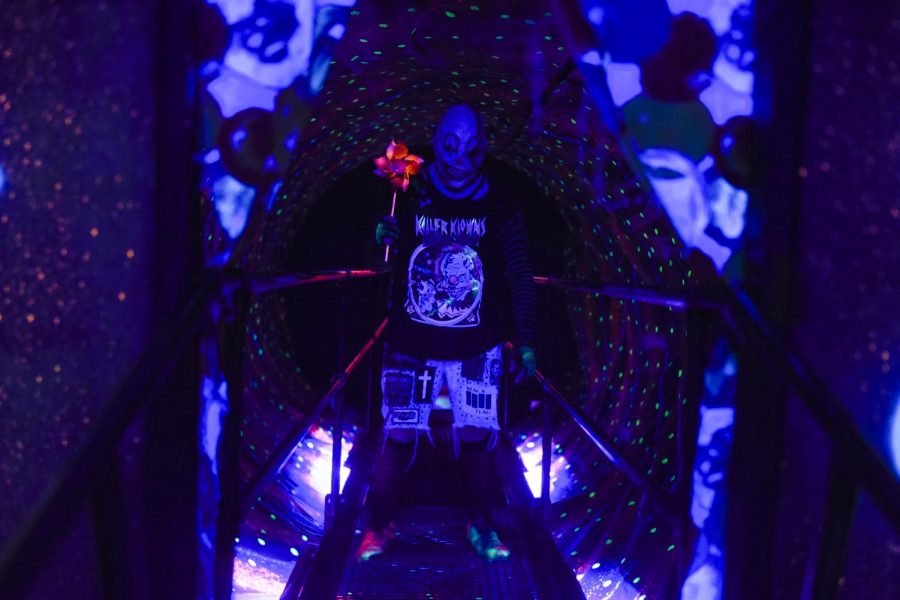 “Most people have coulrophobia or some fear of clowns,” Trahan said. “You try to hit on different types of fears, thematic components, whether they’re supernatural (like) Ancient Evil … or (they have) more realism like with the castle.”

For the first experience of the night, the Texan braved “Castle Orlock.” Twisting around every corner of this maze lurked medieval denizens hiding amongst the castle’s decaying architecture. Progressing deeper into the bowels of the structure, a little girl’s laugh rang out from behind a stack of wine barrels.

Next up, the Texan embarked deep within the swampy caves of “Ancient Evil.” From the start, this attraction wowed attendants with the haunting design of pitch-black caves and dilapidated ruins. Large animatronic creatures thrashed out from every corner.

Deeper in, this maze abruptly transformed into an ice cave, somehow recreated in the middle of a Texas field. Later on, a devilish pirate stood atop a seemingly floating wooden ship, glaring at passersby. The attraction’s impressive use of lighting and fog effects successfully conveyed the illusion of a levitating ghost ship.

“My personal favorite (horror movie) is ‘House of 1000 Corpses,’” Trahan said. “If you go through Clownocalypse (3D), you’ll see an area in there that is very similar to Dr. Satan’s lair. You can see some homages to some of our favorite horror movies out here.”

The final maze of the night, and arguably the most insane, came from “Clownocalypse 3D,” which required 3D glasses for viewing. Every inch of this twisted circus sported neon-bright nightmarish levitating clown imagery in front of the walls thanks to the special glasses, forcing attendants directly into a world handcrafted by an army of maniacal harlequins.

Around every twisted corridor, freakish clowns popped out with excitement, glowing under the 3D-enhanced neon lighting. Electronic music blared through speakers as customers navigated a destroyed ice cream truck and a dizzying rainbow vortex.

“I’ve always been into horror, but what I really love is animatronics,” Trahan said. “When I got my Ph.D. in physics, that’s what I wanted to do — build animatronics for movie sets … When I found out that you could work with animatronics and robotics in (haunted houses), I thought that would be cool. That was 16, 17 years ago, and now here I am.”