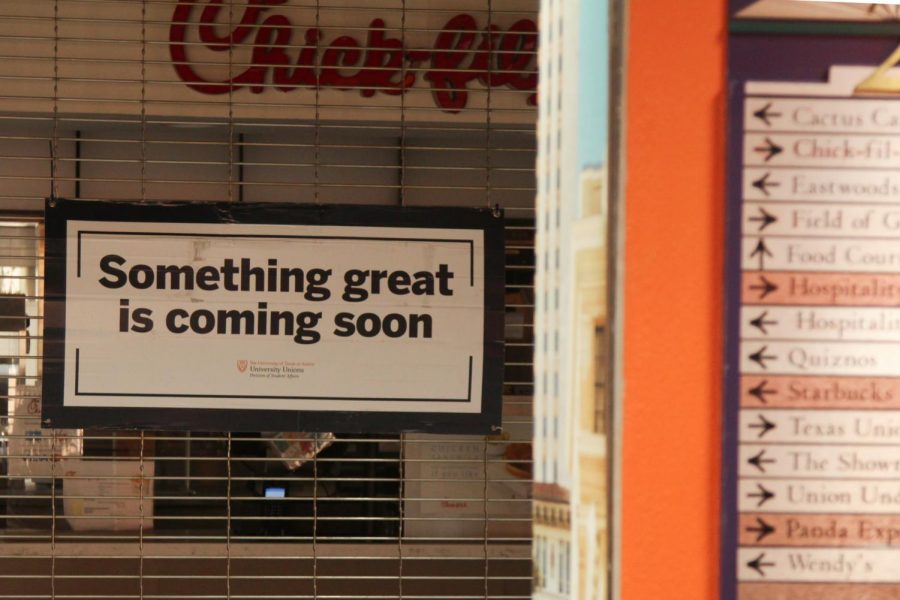 Editor’s Note: This story first appeared as part of the October 5th flipbook.

Sushi and pizza will be on the menu at the Texas Union and William C. Powers Jr. Student Activity Center next semester.

Restaurants to open in the WCP include a Chick-fil-A and a third-party-operated restaurant specializing in sushi and Asian-inspired bowls. The Union will host another Chick-fil-A, smoothie cafe Shake Smart, and Union Pizza.

Longhorn Hospitality, the initiative in charge of on-campus dining changes, will add Austin Local to the Union, a spot that will rotate weekday lunch service among a variety of local Austin restaurants, said David Anthony, director of business services at University Unions.

“Local Austin restaurants do have their own culture and different tastes,” Ahmad said. “I’d rather be supporting local communities if I can do that.”

University Housing and Dining and University Unions now determine all dining locations at the Texas Union and the William C. Powers Jr. Student Activity Center after the contract with UT’s previous vendor was canceled, Anthony said. Additionally, all locations will accept Bevo Pay and Dine in Dollars.

Anthony said Longhorn Hospitality is still waiting on remodeling and infrastructure work before they begin opening the new dining locations. However, Ahmad said he finds the current lack of open restaurant options inconvenient.

“I’m more often than not having to go find places near West Campus or go down all the way to MLK (Boulevard) and go to Chick-fil-A there and stay, even though it’s inconvenient to leave campus and come back on campus for a later class,” Ahmad said.

Currently, the Union Coffeehouse, Tower Burger and Fries, Hook ‘Em Hut — a grab-and-go food and drink kiosk — and Panda Express are open in the Union. At the WCP, there is a Hook ‘Em Hut, The Longhorn Coffee Company and Beyond Burrito.

Ahmad said he hopes loyalty programs at the previous restaurants at the Texas Union and WCP will return.

Psychology sophomore Wren Thomson said the constant changes to dining options have been confusing for students.

“The general inconsistency in food options over the course of my time at UT has been disappointing,” Thomson said.

Ahmad said he is worried about whether these new restaurants will be stable and wants the University to maintain better communication for on-campus dining options.

“I think everyone wants to be in a better understanding of what’s going on and then (would) be willing more to accept these changes,” Ahmad said.