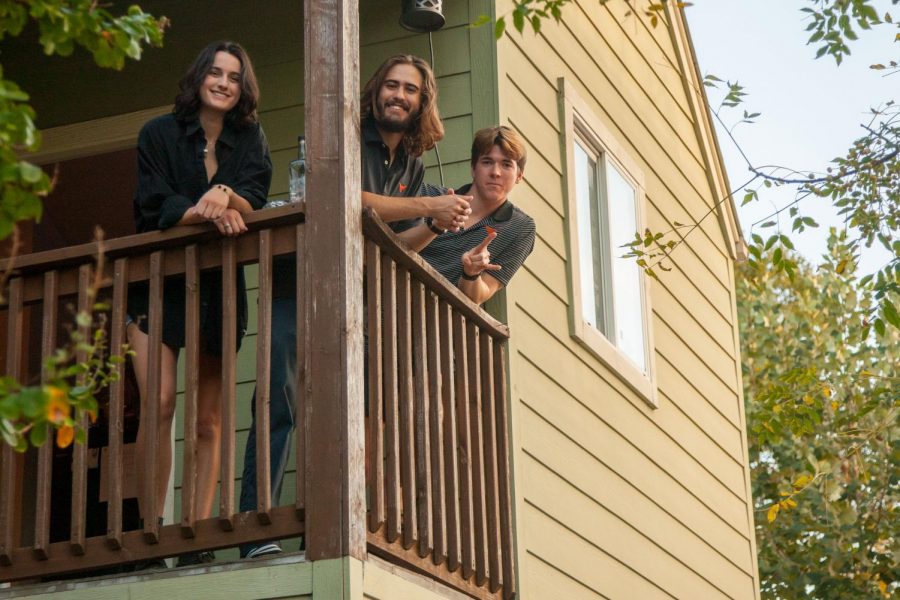 On a sunny porch in West Campus, high school friends Lair-Émile Wysong Reina and Penn McCormack greet their neighbors with friendly waves, laughing together under the boughs of overhanging trees. In this creative greenspace, Reina and McCormack conceived the idea early this semester for a new kind of campus organization: a space for those who couldn’t find a good fit in other student groups.

“(Even the groups that) aren’t Greek (life) are also uber-exclusive,” said philosophy sophomore Reina. “There’s not anything out there that sounds like us.”

Ariana Carr, a Sigma Oasis founding member and government junior, echoed the importance of removing the peer pressure from the decision to party with other members.

Yet to be approved by UT’s student organization center, Reina and McCormack host meetings in their living room. Reina connects with potential members via their instagram (@txsigmaoasis). Although they hope to fulfill needs traditional fraternities and sororities don’t, Reina said Sigma Oasis is not trying to make an “anti-Greek” statement.

“We’re just trying to do something for people,” Reina said. “It’s not so much about Greek life as it is about the people that aren’t in Greek life. There are people in Greek life who want to be involved in our organization, and that’s cool too.”

McCormack, a government sophomore, dove head first into campus life when he bid for a UT-Austin fraternity while completing his freshman year at UT-Tyler. Despite his admiration for those in the fraternity and respect for the organization’s charitable aspirations, working as a camp counselor the summer before coming to Austin made him evolve past the demands of Greek culture.

“I felt like I wasn’t creating the same value (during rush) that I was creating back (at camp),” said McCormack. “I wanted to continue that trend of doing something that was putting more value into the world than it was taking out.”

McCormack said he seeks to “flip the narrative” and combine aspects of Greek life with experiences that foster personal growth in himself and others. He also shared his excitement for the opportunity to start an organization with gender diversity.

“To have these strong and smart women on the team (is different from) what I’m used to back in high school and in Greek life,” McCormack said.  “It’s really interesting to have smarter people than me and (Reina) contribute their different perspectives.”

Carr also said she felt trepidation about joining a sorority, fearing she would feel a need to behave in an inauthentic way.

“Especially me (usually presenting as) an obviously gay woman, Sigma Oasis sounded like a place where I could (be myself), but enjoy the benefits of the camaraderie and good things Greek life has,” Carr said.

Carr emphasized her intention to help shape the group’s constitution to foster compassion for new members. Despite potential pitfalls of starting a new organization, Carr is hopeful for the future of Sigma Oasis.

“We have the opportunity to build something really great here for the future,” said Carr. “If we can just maintain the energy we have now, and be deliberate with our actions … this will be an awesome experience for anyone who wants to get involved.”