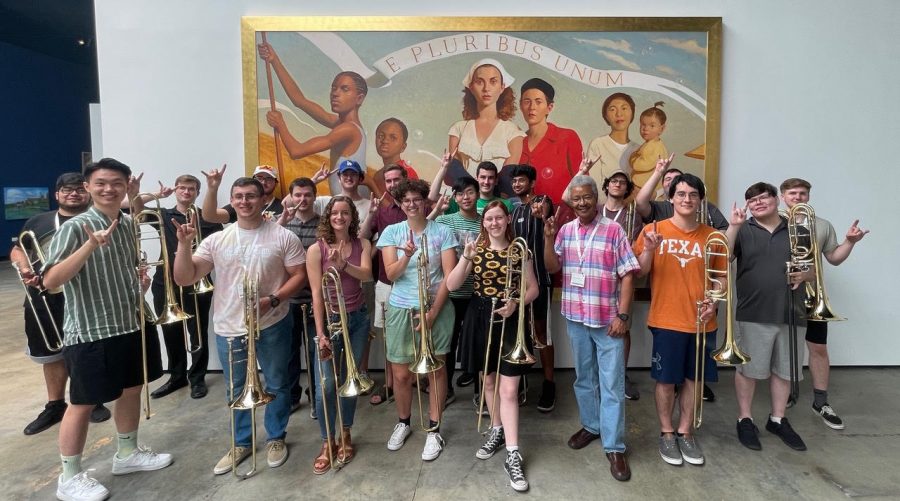 Professor of trombone Nathaniel Brickens is one of two professors at UT to receive the award this semester, said UT Systems spokesperson Karen Adler. Brickens said he thinks it is important for students to have a global perspective. He said he also integrated technology for how students perform ensembles since COVID-19 caused classes to go online.

“Zoom is such an unforgiving medium when you’re dealing with audio quality,” Brickens said. “We finally figured out, instead of using Zoom for the audio and video, we could use Zoom for the video part and use an app called Cleanfeed for the audio.”

Brickens said he told his students to simply keep preparing for the career they wanted and brought former students to class via Zoom to keep students motivated in the online format.

The professor said he used to take his students to Brazil, France, Switzerland, Germany and Denmark to perform at various music festivals, but had to stop because of the pandemic. He said he also invites international artists to UT to provide master classes and performances and to network with the students.

“Getting to meet other musicians of our similar age level, ability from different parts of the country, I think is really valuable for us to get to experience what else is going on around … outside the UT level,” said Adam Williams, a UT alumnus and former student of Brickens.

Lauren Casey-Clyde, a music performance graduate student, said that since Brickens is connected with many people, he helps students meet new people in the industry, find events to perform at or get lessons.

“My experience in COVID with him was wonderful because, like most artists, it was hard to stay motivated and do online school,” Casey-Clyde said. “But every week he gave me a new challenge. … It really kept me going because there’s nothing else to do except for practice.”

Brickens said he felt surprised having won the award, but both Casey-Clyde and Williams said he earned it.

“He’s just so selfless and always understands exactly what the student needs, and because of that he’s able to help every single student get towards their goal and that’s not a case for a lot of teachers,” Casey-Clyde said.