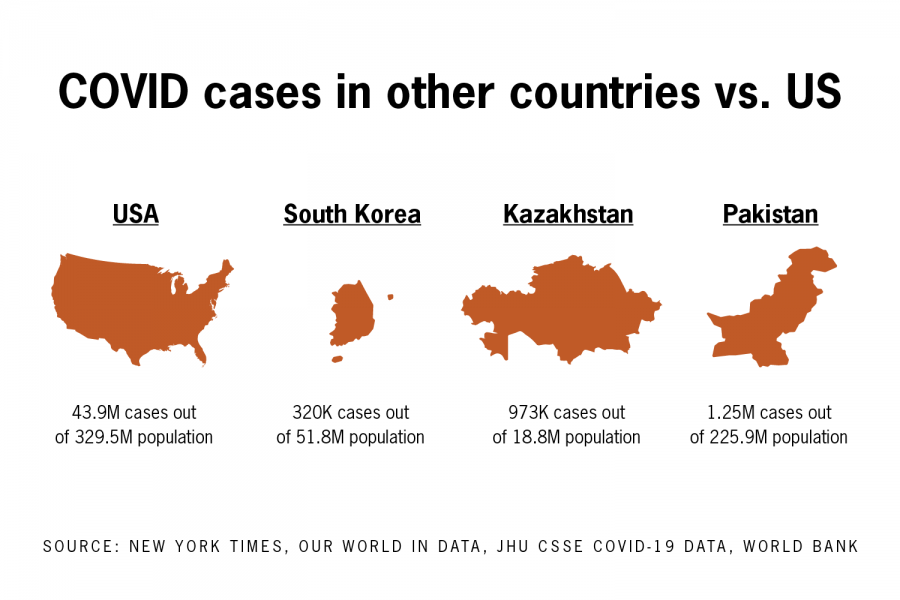 International students compare the United States’ response to COVID-19 to their home countries.

Students from Pakistan, South Korea and Kazakhstan say the United States has more vaccine access and rollout than their home countries, but the U.S.’s restrictions in regards to mask requirements and gathering are more lenient.

Graduate student You Chul Shin, who moved from South Korea to Austin in July, said the U.S. and the University’s COVID-19 response is relaxed compared to the precautions of his home country, which has a nationwide mask mandate and a public website that tracks the movement of COVID-19 infected people.

“In my country, the central government strongly regulates the whole nation for the sake of public safety,” Shin said in an email.

For instance, private meetings are limited to two to eight people depending on the severity of COVID-19.

Graduate student Muhammad Jahanzaib Aijaz said that while the United States has more COVID-19 tests and vaccines available than in his home country of Pakistan, he has seen a relaxation in restrictions since he first moved to Texas in January.

“Especially (apparent) in classes, (the U.S.) removed the mask mandate,” Aijaz said. “But what I’ve heard is that in Pakistan they still have the mask mandate for indoors and big gatherings, … and they enforce it.”

Graduate student Ali El Mussauy, who moved from Kazakhstan in August, said the Sputnik V vaccine available in his country has not been accredited, so he waited to get the vaccine in the United States.

“I didn’t take (the vaccine) back home,” Mussauy said. “When I came here, I contemplated (taking) the vaccine, but once I said I would, it was very easy to get the vaccine.”

Mussauy said he appreciates the autonomy given by the U.S. to citizens in its COVID-19 response.

“I like the openness of giving each person (the choice) to make their own decision to wear masks on campus,” Mussauy said.

Mussauy said while everyone should have the ability to decide whether or not to get the vaccine, the U.S. should do more to promote it.

“Just making sure people are aware of the benefits,” Mussauy said. “Increase that awareness. … That’s more than enough.”