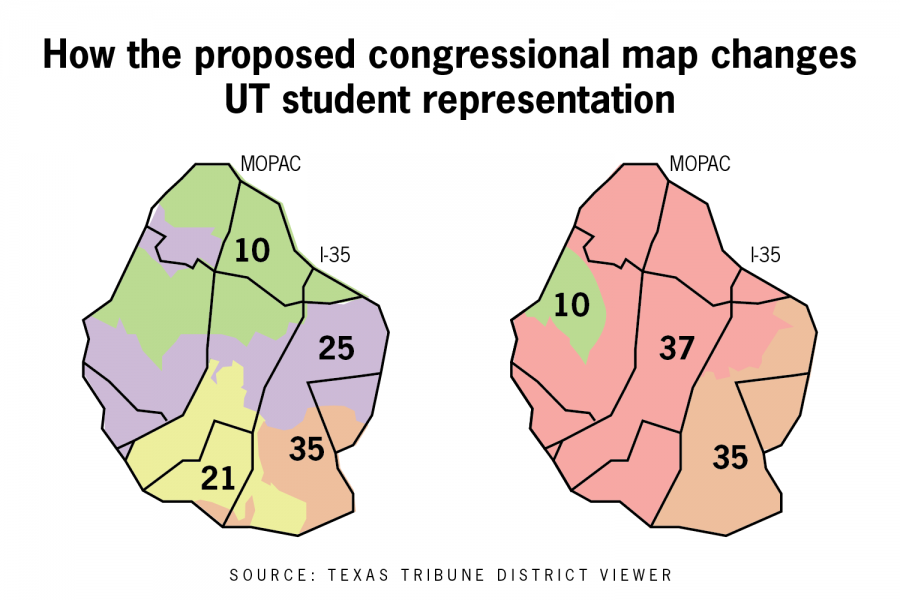 Editor’s Note: This story first appeared as part of the October 5th flipbook.

“(The map) leaves out key student hubs such as Riverside which hosts a substantial student population, especially students who look to benefit from lower rents,” Aggarwal said. “They’re not able to effectively vote for representatives that support their interests in office.”

”When you look at a map that organizes various chunks of land into districts, it should be nice to look at. It should be clean, whereas our current congressional districts are very haphazard,” international relations and global studies, Asian studies and economics sophomore Aggarwal said. “Right now, (the current map) separates West Campus from actual main campus, so students are separated into different congressional districts and gerrymandering essentially just stifles our voices consequently.”

Joshua Blank, research director of the Texas Politics Project, said because Republicans control the Texas House and Senate, they were able to draw lines that maintain their current seats and their majority within the legislature.

“The primary goal of redistricting is to make sure that every voter’s vote counts equally,” Blank said. “The process itself is significantly more complicated in that there are considerations that have to be met … to make sure that historically discriminated against groups are fairly represented in any maps produced by anybody.”

Jacqueline Santillana, a government senior and outreach chair for Texas Rising, said she testified at the Capitol during a redistricting hearing to bring awareness to lack of voter representation in the proposed maps.

“I honestly didn’t really get informed about redistricting until I moved to Austin, and once I did, I realized how divided our districts were,” Santillana said. “I saw that some people who were living in West Campus, while I was living in the dorms, were in a different district, and then while living in Riverside, I lived in another district in comparison to people living on campus. So we were all being represented by different representatives.”

Santillana said having students in a single congressional district would also make the voter registration process easier for those who might not know what district they live in.

“When people are registering to vote, they always ask me ‘What’s going to be on my ballot?’ or ‘Who represents me? Who’s running?’, and I can’t really give them specifics,” Santillana said. “I have to help them understand that UT is divided by different districts, so it makes it a little more difficult for them to understand the electoral process.”