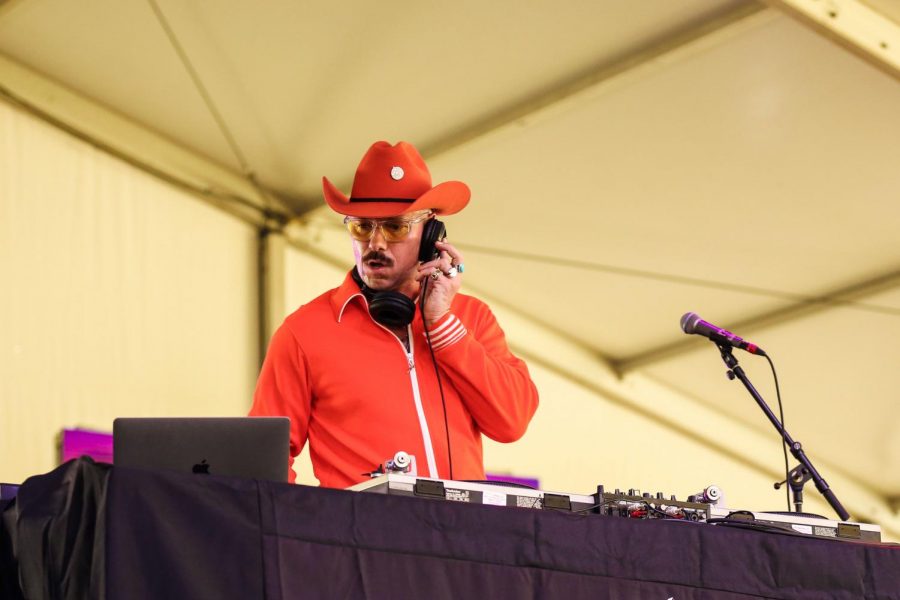 Under the Tito’s tent at Austin City Limits, classic and plastic pink cowboy hats bobbed up and down as people danced to the masterful music mashup of battling genres: country and club. As Houston native Disko Cowboy spun his tracks, people gathered to listen to the rare discography.

Before his Weekend 2 ACL set, The Daily Texan spoke with Disko Cowboy, also known as Dave Wrangler,about his unique act.

The Daily Texan: As a DJ, every set you play is unique. How do you prepare for a set?

Dave Wrangler: I’ve been DJing for 20 years, so I’ve learned that if you over prepare, then you paint yourself into a corner … I’m not sure what’s gonna happen today. I know 50% what I prepared for it, but I leave 50% (to chance). And that’s what keeps it exciting … I have a really good understanding of every facet of music and every facet of pop culture. I can kind of mix them all together and leave everyone walking away like with a smile on their face.

DT: How do you build your eclectic mixes of country and club music?

DW: Country music is becoming really popular. And folks in club music culture are more accepting of it, and now that’s all people want to hear — Shania Twain, Chattahoochee. They also want to hear Diplo and all the club songs.

DT: You played on Friday of Weekend 1 after a delay. As a DJ, how did you adapt to this?

DW: (Weekend 1), there was a delay at the gates, so there weren’t a lot of people. So I kind of spent the first 20 minutes in my set … burning fuel before I could land (and) waiting for more people to show up. This week, though, I’m coming out hard and fast and furious.

DT: Your brand, Vinyl Ranch, has over 112k followers on Instagram. How do you balance your persona as Vinyl Ranch and as Disko Cowboy?

DW: What I’m doing resonates with a lot of people who are tuned into pop culture right now, and I’m clearly capitalizing on the cowboy thing. I’ve been doing it for quite a while, but it’s cool to see pop culture catch up to it … I’m basically kind of leveraging my vinyl ranch social media universe that I’ve created to pull people in.

DT: You played a lot of smaller Texan artists during your Weekend 1 set. What is the importance of playing those artists to you?

DW: It’s your duty if you get in front of a large audience to share lesser known artists that are maybe unsigned, independent, don’t have the big marketing dollars or are not signed with a label that has marketing dollars to put billboards up everywhere. I played a couple of tracks in that set that were by friends of mine that are Texas locals. One of them was Jonathan Terrell, and then in the middle I played Garrett T. Capps’ big single, which happens to be the first release on the Vinyl Ranch Record Label. (As a) part of the Vinyl Ranch family (I try) to showcase everyone.