Texan Tuesday Football Talk: Longhorns look to get back on track in Waco 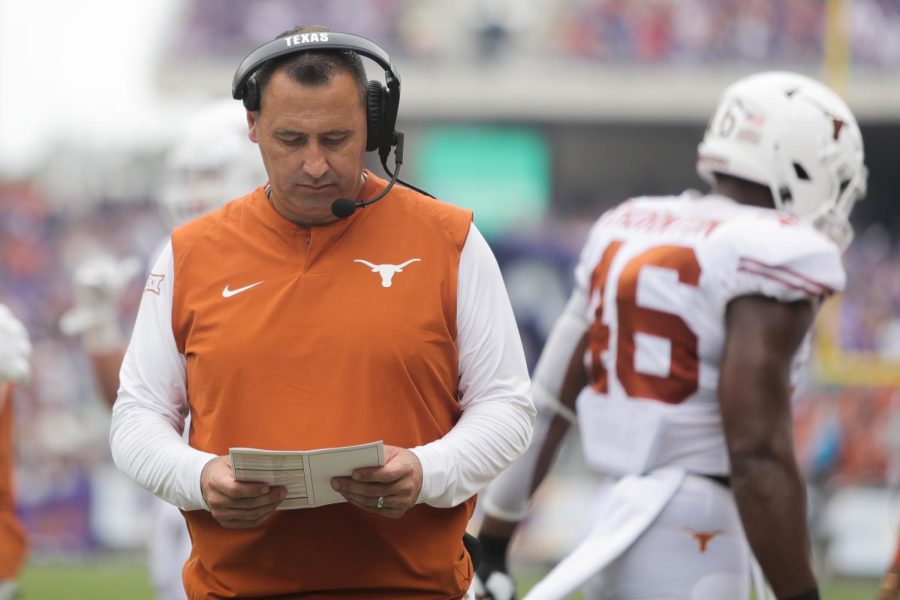 Nathan Han: It seems like we’ve said this every week, but this game against No. 16 Baylor feels like a true crossroads for Texas football this season. Win against a ranked opponent on the road and keep your Big 12 championship hopes alive? Or lose a third straight game and fall to .500?

What’s your impression of how the bye week has helped Texas prepare for this game against the Bears and how they’ve seemed to respond to the past two losses?

Matthew Boncosky: Head coach Steve Sarkisian seemed to be in a good mood on Monday when talking about how his team has attacked the bye week. We learned that the team watched the movie “Free Solo,” a film about a rock climber’s daring attempt at free climbing famed El Capitan in Yosemite National Park, to help them get into the right mental focus going forward.

We talked to running back Roschon Johnson and defensive back Josh Thompson on Tuesday, and both expressed excitement with the way practice has gone this week. The team seems to be in good spirits moving forward. I think Oklahoma State losing at Iowa State this past weekend put a little bit of hope back into the Longhorns for the rest of the season. The door was pushed slightly open towards a potential Big 12 championship game appearance with that loss.

While the team seems to have enjoyed the benefits of the bye week, a tall task awaits the Longhorns as they travel to face 6–1 Baylor in Waco. The media picked the Bears to finish 8th in conference in the Big 12 preseason poll, so in what areas have the Bears exceeded expectations on their way to the No. 16 ranking in the AP Poll?

NH: Records can be deceiving, as we’ve seen with the previously 6–0 No. 8 Oklahoma State before they fell to Iowa State. But there’s a reason Bears head coach Dave Aranda is being named as a candidate for the LSU and USC head coaching jobs.

He’s built a defense that not only returned 10 starters, but also includes a few stars and one big transfer. Sophomore transfer nose tackle Siaki Ika is a disruptive force on the line that Texas quarterback Casey Thompson said stood out on film. The quarterback also mentioned hybrid linebacker/safety Jalen Pitre, who plays the “STAR” position like defensive back Anthony Cook does at Texas, as somebody to watch.

It feels like every team is returning an experienced defense this year, likely due to the COVID-19 eligibility granted to players. Baylor’s defense is no different — but the Bears also have one of the top defensive minds in the nation as its architect.

How do you think the Texas offense can handle the defense? What have you seen from the weapons after sophomore Jordan Whittington went down with an injury?

MB: Texas’ offense has shown that it has enough firepower at the skill positions to compete. We’ve seen that with their early leads, but the offensive line still needs to step up if the offense is going to take the next step. We’ll see if the off week allowed offensive line coach Kyle Flood a chance to solidify the five he wants making up that unit.

In terms of the other wideouts since Whittington went down, junior Marcus Washington was a name that fans were excited to see get some more playing time, but he didn’t record a single catch last week. In addition, junior Joshua Moore just caught one, continuing his down year. I’d like to see those two guys rebound this week to instill confidence in the receiving corps.

On Monday, Sarkisian gave a refreshing answer about wanting to spice up the play calling when the offense struggles. Do you think Sark needs to open up the playbook more and what would that look like in your eyes?

NH: I do think something needs to change in Texas’s second half play calling, whether it’s being less predictable when it comes to running versus passing or mixing up the personnel to help a struggling offensive line.

In the first half against Oklahoma State, Sarkisian elected to go with two running backs or two tight ends (in 12 or 21 personnel) in several plays that helped the run game get going to the outside. But the offensive play caller went back to 11 personnel (one running back, one tight end and three wide receivers) often in the second half, and Texas had problems running the ball and protecting the quarterback without extra help from another blocker.

With an extra bye week, there’s no doubt that Sarkisian will have something up his sleeve when the offense seemingly stalls. But finding the right personnel to fit around a depleted offensive line will ultimately be the deciding factor for the Texas offense.

That being said, I’m taking the Longhorns to go into Waco and come out with a W, 36-23 (Scorigami!).

MB: I’ve been thinking a lot about this, and I’m still not sure where to pick this game. On the one hand, I think Baylor is a solid team and going on the road to win would be tough, but I also don’t think Texas will lose three games in a row. Because of that, I’m going to take Texas 40-38 in overtime.