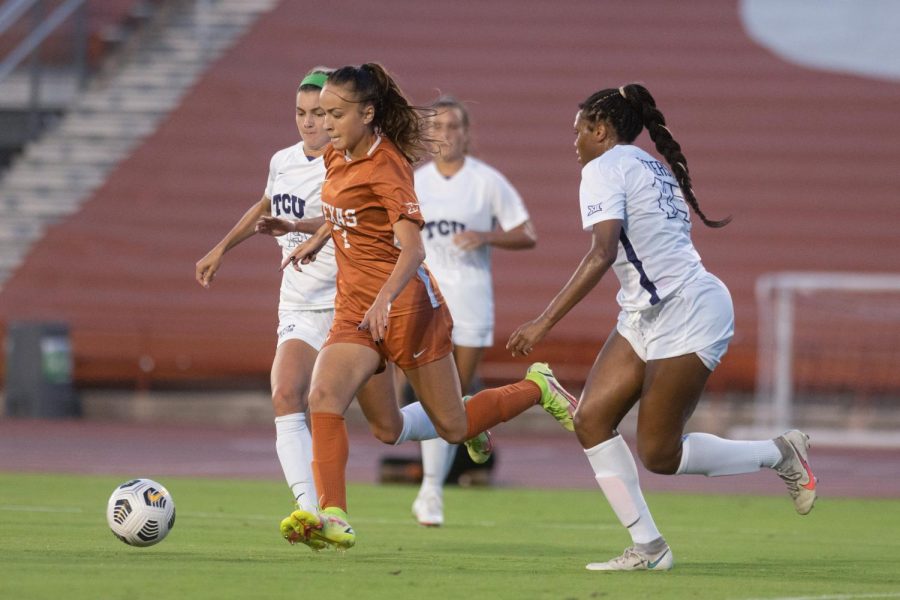 Here are some of the most exciting matchups for the upcoming week in Texas athletics:

Postseason seeding and the Big 12 regular season championship is on the line Thursday as Texas travels to Lawrence, Kansas, to face off against the Kansas Jayhawks in a conference bout. The Longhorns sit at 9-3-5 this season, with a 5-0-3 record in conference play, having not lost a single game against a Big 12 opponent. Kansas, on the other hand, has a record of 7-10-1 overall and a 2-6 record in conference play.

Kansas’ best player is sophomore forward Brie Severns, who leads the team in goals and assists with six each.

A win Thursday will put Texas in prime position for a top seed in the upcoming Big 12 Conference Championship and the NCAA tournament in November. Not to mention, the Longhorns would likely face Kansas in the first round of the Big 12 tournament the following week, depending on how Thursday’s game goes.

Texas is coming off a bye week and should be well prepared to face off against a 6-1 Baylor team. The Longhorns lost two games in a row prior to the bye week, so hopefully a clean slate will spell more success for Texas Football going into the latter portion of the season.

Baylor is red-hot after beating a ranked BYU team last week, with the Bears offense, which is averaging just over 38 points per game, stealing the show.

Baylor has a two-headed rushing attack spearheaded by senior running back Abram Smith and fifth-year running back Trestan Ebner. These two players average over 182 yards of offense combined per game, with Smith garnering the most red zone touches as evident by his 10 touchdown runs on the season.

The rest of the Baylor offense is carried by junior quarterback Gerry Bohanon, who has 18 total touchdowns on the season and a combined 1,697 yards in the air and on the ground. Baylor’s offense is dynamic and multifaceted, so it will be imperative for the Longhorns to be disciplined against the run game while maintaining a stingy pass defense.

On the other side, Texas redshirt junior quarterback Casey Thompson is coming off a rough performance against Oklahoma State. Despite the poor outing, this has to be a bounce back week for Thompson to regain some confidence after his last game.

If Texas can establish the run early and command an early lead, the Longhorns should be in good shape to play disciplined football and hold onto a lead for the first time in almost a month.

After Texas’s last conference game at Kansas on Thursday, the Longhorns will travel to Round Rock for the Big 12 Championship on Sunday.

Texas has been nothing short of spectacular this season in conference play, climbing all the way up to the No. 20 spot in the national rankings. Freshman midfielder Lexi Missimo and freshman forward Trinity Byars each scored eight goals so far this season, combining for over half of Texas’ total goals.

Texas’ main threat in the tournament is TCU, who is currently ranked No. 8 in the country and tied the Longhorns 1-1 in two overtimes the last time these two teams faced off. If Texas is forced to face off against the Horned Frogs next week, the Longhorns will have their hands full with TCU’s overwhelming offense and stifling defense. TCU has only given up 10 goals on the entire season, while scoring 42 goals themselves.

Texas has just as good of a chance as anyone to win this tournament, with a win giving the Longhorns a boost of momentum heading into the first round of the NCAA tournament on Nov. 12.