Texas women’s soccer breakdown: Where will Longhorns be seeded in Big 12 Tournament? 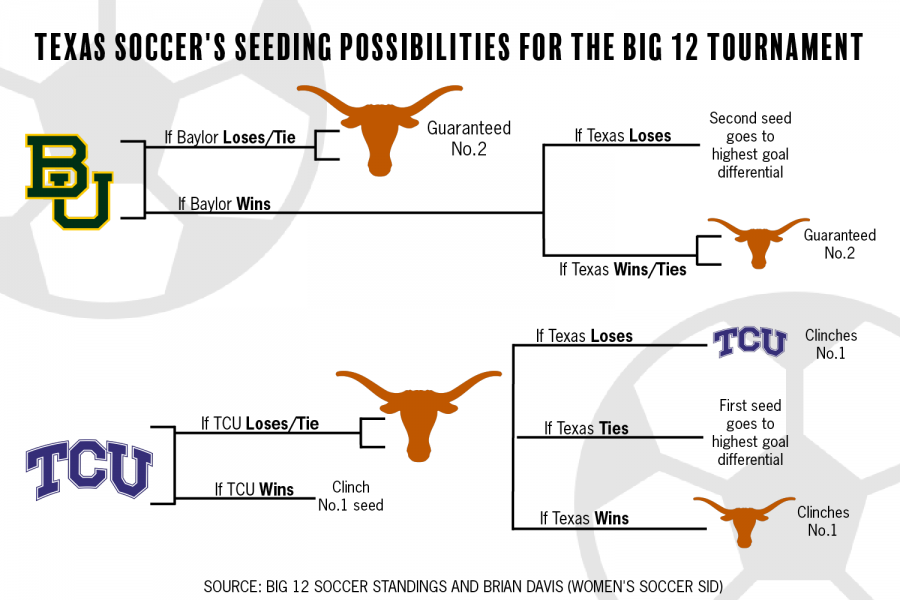 With one game left in the season, it is almost time for the Big 12 Championship for Texas soccer. Due to the Oklahoma State-Iowa State game getting cancelled due to lightning on Sept. 30, seeding for the tournament is different from past years.

Instead of looking at a team’s conference record, the seeding for the tournament is now determined by points-per-match. Teams are assessed points based on their results in every conference match — three for a win, one for a tie and zero for a loss.

Since Texas is 5-0-3 in conference play, the Longhorns are averaging 2.25 points per match for a total of 18 points.

Texas can end up in the first, second or third seeds in the Big 12 Soccer Championship. The program hasn’t finished as a top two seed since 2007.

With a win against Kansas and a TCU tie or loss to Texas Tech, the Longhorns will take the first seed, the regular season championship and will likely play either Kansas State or Kansas in the first round.

If Texas ties Kansas, coupled with a TCU loss, then there will be a tie for first place in the Big 12. In that case, the first tiebreaker would be the head-to-head result. Since Texas and TCU tied 1-1 on Sept. 30, the goal differential, which is the difference between goals scored and goals conceded by each team, is the next tie breaker. Only goals scored and allowed in conference matches will be used. The team with the higher goal differential would take the first seed.

Texas’ most likely opponent as the second seed is either Oklahoma or Oklahoma State, with a chance of playing West Virginia if the Mountaineers take a loss on Thursday.

A Texas loss and a Baylor win against Oklahoma would result in a tie for the second seed, in which the aforementioned tiebreaker rules would also apply. Texas and Baylor tied 0-0 in their match on Oct. 15, so goal differential would again be the tiebreaker.

This is Texas’ worst-case scenario, which could lead to the Longhorns dropping to the third seed and playing Oklahoma State or West Virginia.

TCU controls its own destiny. With a win, they clinch the first seed. A Texas win or tie on Thursday will guarantee that it finishes no lower than the second seed.