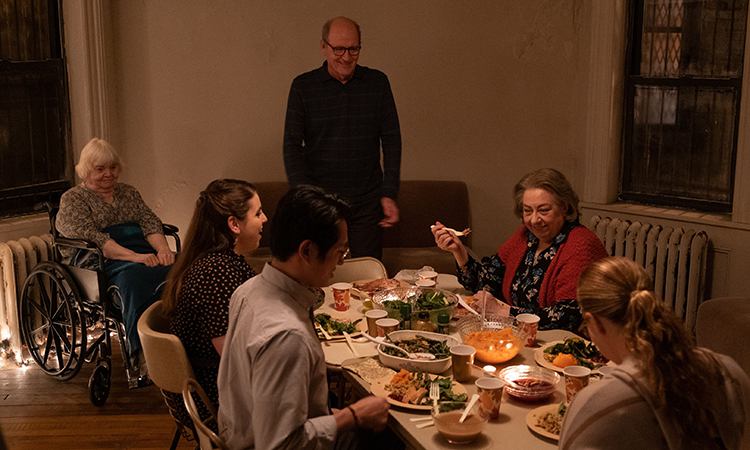 While the Austin Film Festival wrapped up its final weekend, “The Humans” premiered at the Paramount Theater. The A24-distributed, play-to-film adaption follows a dysfunctional family as they congregate during Thanksgiving dinner in an eerie apartment building. Using genre-bending tactics, unfiltered performances and masterful sound design, writer-director Stephen Karam crafted an intense moviegoing experience. The Daily Texan spoke with Karam about his process creating the film.

The Daily Texan: Were the horror elements there from the beginning or did they come through more in film?

Stephen Karam: Even from the opening moments on stage, it was always sort of conceived to be both family drama but also with elements of a stage thriller sort of infecting it throughout. I always thought of it as a family thriller, even on Broadway. Film can exploit horror in a way that is so specific and the uncanniness of what a camera angle can achieve.

DT: How much insight did you have into the set design when it came to the layout of the film’s main location?

SK: Production designers pay a lot of exciting attention to really small details. On stage, with 2,000 people in a theater, you would never pay attention to just one corner, one tiny patch of faded wallpaper. … (The design work in the film) hopefully creates that sense of the history of the space, the people that have been there before. (It) makes (the apartment) like a living character.

DT: There are so many strange close-up shots of random areas of the location intercut within scenes. How did you creatively approach this unsettling technique?

SK: The idea of these series’ of shots threading through the film of the space were meticulously thought out. Sometimes you end up discovering they’re connecting to what Eric is staring at, but also to give the apartment and (the) whole film a sort of voyeuristic feel. … You don’t know why you are being led to these things. They are always attached to the room which you then end up in. … It’s never totally random. Part of the visual music of the piece was always the idea that threaded through strategically in these moments would be these three or four pillow shots just reminding you of the space even as you just hear their voices.

DT: With so many genre elements all at once, how would someone describe this movie to friends?

SK: I’m super intrigued by genre collisions. … I would probably (say) a family thriller, very much a family drama-comedy, but mixed in are these elements of horror. … I’ve learned that you can scare away all these people who would love the film if you pitch it too much as horror … (but) if you pitch it too much as a family drama, you lose the horror fans. I think the horror fans seem to be continually surprised. I’ve found that fans of the genre can handle quiet, sophisticated horror, and they quite like it. I don’t know. I’m leaning on you. Lead the way for when it’s in Austin in theaters. Let me know what you discover.