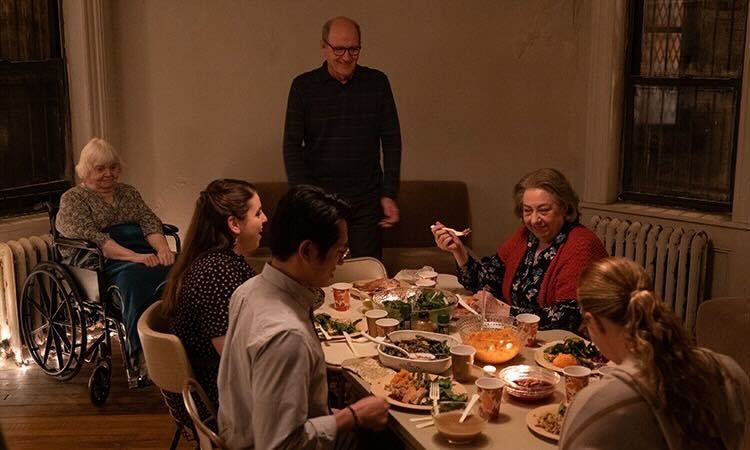 “The Humans,” directed and written by Stephen Karam, follows a dysfunctional family as they gather for a Thanksgiving dinner they will never forget. Based on the stage play of the same name, also written by Karam, the narrative dips its toes into comedy, drama and even horror to showcase the unpredictability of family get-togethers. Harboring a surprising amount of realism and emotion, Karam has crafted an exquisite film experience with no better word to describe it than simply human.

Much like the stage version, set design plays a critical role in the atmosphere of “The Humans.” The decaying setting fits the thriller perfectly, and serves as the prime setting of an uncomfortable Thanksgiving dinner. Everything, from the awkward turns required to get Momo’s wheelchair into the home to the lewd graffiti on the building elevator, adds to the oppressive tone of Karam’s world.

Despite an apartment of horrors, Karam sprinkles in a surprising amount of heart and comedy throughout the narrative. Effortlessly delivered monologues and family banter add an impressive sense of realism to the interactions between the cast. Dynamic camera movements and particular edits emphasize emotional beats throughout the film. Frequent cuts to extreme close-ups on miscellaneous objects add an unsettling aura to the sequencing of the scenes. As character conversations ramble on and on, the edit often interjects with a shot of an unrelated object, refusing the audience a visual component to what they are hearing.

With an impressive cast featuring Steven Yeun, Amy Schumer and Richard Jenkins, Karam’s screenplay comes to life with ease. Natural dialogue makes the audience feel like they’re  observing a real-life family interacting at Thanksgiving. The characters take on a dynamic rollercoaster of emotions, but effortlessly so. One moment the ensemble is cackling about old memories, the next they stomach heavy family confessions that change the mood in an instant. All of the performances read as vulnerable and superbly capture the audience’s sympathy.

Through all of “The Humans” dizzying emotions, it always manages to infuse a haunting amount of horror genre DNA. Ominously intricate sound design enhances every single creak and shake of the old building and brings the main location of the film alive. As tensions run high during a key sequence, the seemingly mundane apartment assumes the role of a terrifying house of horrors. Darkened hallways and the sporadic banging coming from the upstairs neighbors come together to craft an impressively terrifying sequence featuring one of the main characters.

Overall, “The Humans” is a fantastically crafted film that depicts the intensity of family get-togethers in all of their terrifying, tragic and hilarious glory.