The loss to Baylor isn’t about Texas’ struggling rushing attack. But something needs to change for the Longhorns on offense. 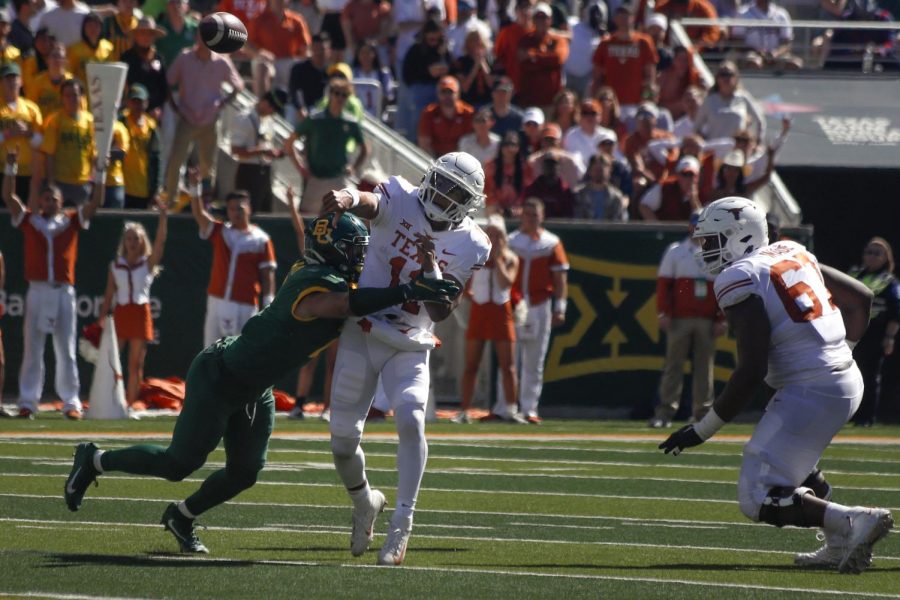 Let’s get the obvious out of the way.

Saturday was the sophomore running back’s worst performance of the season and the Longhorns’ worst game running the ball all season, too. But the 31-24 loss against No. 16 Baylor wasn’t about Texas’ failure to run the ball effectively.

“The running game was tough,” head coach Steve Sarkisian said. “And we knew that coming in. These guys are a big unit up front (with a) really, really good nose tackle (Siaka Ika).”

Led by head coach and defensive guru Dave Aranda, the Bears went with a simple game plan: stop Robinson, Texas’ best offensive player and a Heisman candidate. The Baylor defense stacked the box and dared the Longhorns to make them pay.

“They loaded the box for most of the game,” Robinson said. “That’s their game plan, and we have to try to execute off of it. But the good thing was that that opened up a lot for the passing game and opened up a lot throwing the ball downfield.”

And for one and a half quarters, redshirt junior quarterback Casey Thompson did make them pay. He threw a beautiful arching pass that seemed to reach the upper decks of McLane Stadium in Waco for a 63-yard touchdown to freshman wide receiver Xavier Worthy at the end of the first quarter.

But, as is tradition for Texas this season, the Longhorn offense stalled. Thompson completed 12 of his first 14 passes before connecting on just 11 of his next 24 throws.

No. 15 and No. 16 especially hurt. With a 14-10 lead in the second quarter, the quarterback seemingly found another gap in a single-high safety look from Baylor and lofted a throw into the waiting hands of junior wide receiver Joshua Moore, who had run a go route to find himself open in the end zone.

But Moore just couldn’t hang on after being hit by a Baylor safety. On the next play, Thompson once again found an open Moore, this time on a crossing route across the middle of the field. The ball came just behind the speedy wideout, and bounced off Moore’s hands for a crucial interception that took a sure field goal and a potential touchdown drive off the board.

Baylor gave those opportunities to Texas because the Bears decided to sell out to stop the run. And those are the opportunities that the Longhorns cannot miss if they want to win games on the road against ranked opponents.

After the Longhorns’ 4-1 start to the season, Sarkisian, the team’s offensive play caller, said the run game was his team’s strength. Texas had just gone into a hostile environment in Fort Worth and came out with a win over TCU on the back of a 35-carry, 216-yard performance from Robinson.

But with defenses loading defenders into the box and overpowering the Texas offensive line with talent, the run game is no longer the first option. Nor should it be: the simple numbers game of defenders versus blockers in the box meant Robinson did not have much room, if any, to operate with on Saturday.

“We dropped back (to) pass more today, which I don’t know is the strength of our team. But to get to play the style of play that we want to play, we’ve got to find a way to run the football better than we did today.”

The Texas passing attack just couldn’t get the final step done Saturday against Baylor, whether it was the Moore drop or a pass that glanced off the hands of junior wide receiver Marcus Washington in the final Texas drive of the afternoon. Texas was oh-so-close: a catch could have put the Longhorns in the red zone with an opportunity to tie the game.

So when the Longhorns go back to the drawing board, staring at another hostile environment on the road against a likely ranked opponent in Iowa State in Ames, Iowa, the solution isn’t to try to run their head against a brick wall over and over again for 3 yards per carry in an attempt to try and use the run to open up the pass and the play-action attack.

Instead, as defenses take away the run, Texas needs to be a better passing team and find a way to execute over four quarters. But that’s easier said than done, as Thompson, Moore and company found out in Waco.