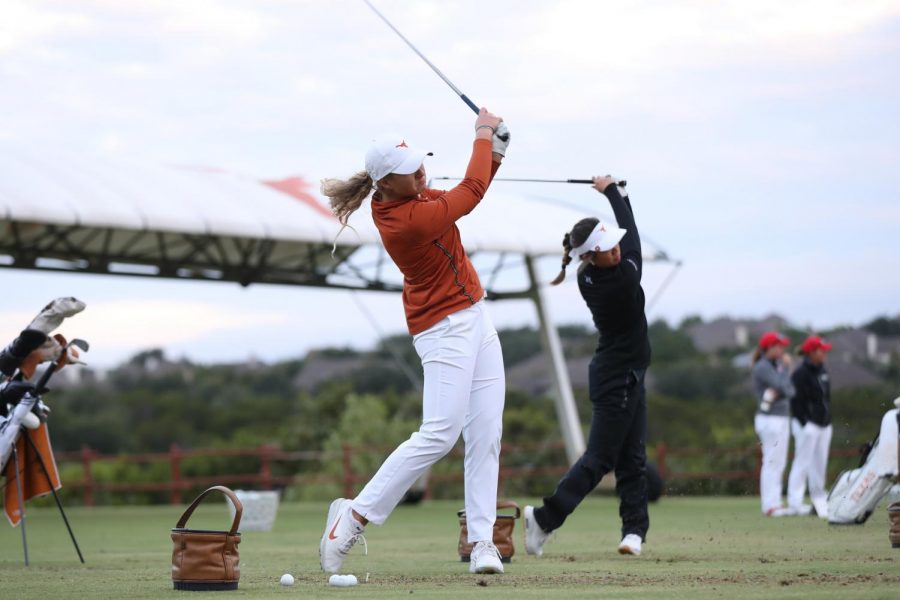 At the start of most seasons, Ryan Murphy, Texas women’s golf head coach, takes pride in teaching his players several key values. This season, Murphy has emphasized one of those values: the importance of being a great teammate.

Two golfers in particular have exemplified this value through their fast friendship: senior Sara Kouskova and freshman Bohyun “Bo” Park. Since the start of the fall season, Kouskova and Park have contended in every competition, traded team-leading finishes and formed a bond.

“(Sara) is like my mom on the team,” Park said. “I go up to her whenever I need help or have questions. … I’m really glad to have someone like that (on the team) we can rely on.”

Reliable as always, Kouskova led the team through the Landfall Tradition Collegiate Tournament this past weekend in Wilmington, North Carolina, with a strong final round of two under par, pulling her up from 22nd to 12th on the individual leaderboard. Park powered through some struggles in the second round, rebounding with a pair of birdies and wrapping up her fall season tied for 23rd overall.

Although the finish is likely not what head coach Ryan Murphy had hoped for, he believes in a variety of different ways to be successful in a golf tournament.

“We try to win every time we tee it up,” he said. “(But) we’ve played what will likely be the most difficult schedule in the country. Even in the fall, it’ll be in the top three toughest schedules, … and we do that by design. We want our players seeing the toughest teams around the country.”

For Park especially, the toughness of the competition has furthered her ability to compete with the best of the best and one day achieve her goals, many of which reflect Murphy’s intentions for the team.

“I want my team to understand what we have to do to beat the very best in the country because that’s what we’ll do come the NCAA tournament (in May),” Murphy said.

No matter how they’re performing, Murphy continues to hold his players to his key values in order to cultivate healthy team dynamics.

“(At the end of the day) we’re in this together,” Murphy said. “We got a common goal, and so it behooves us all to be positive towards each other and be a great teammate.”