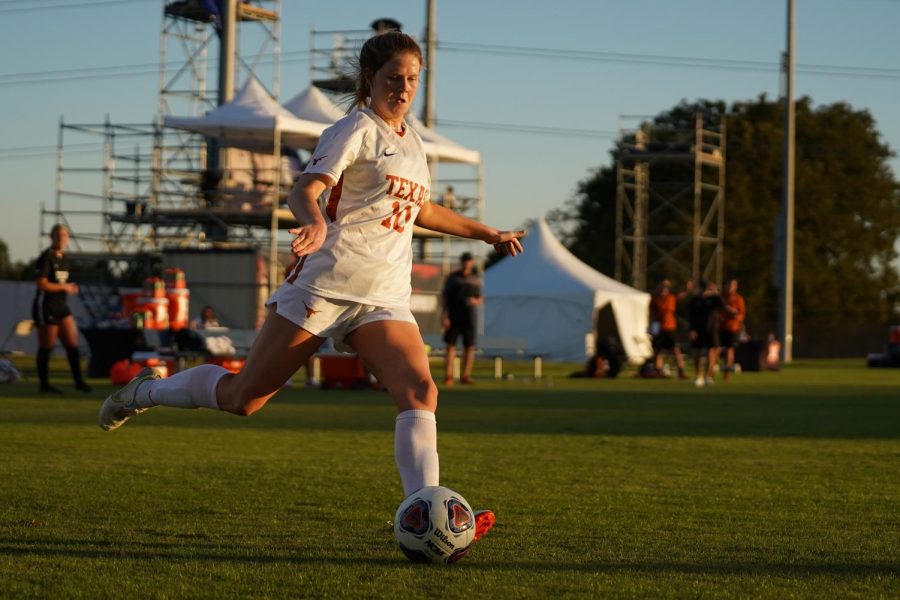 Here are some of the most exciting matchups for the upcoming week in Texas athletics and professional sports:

Texas is looking to make a run at the Big 12 title, taking on the West Virginia Mountaineers on Thursday night in Round Rock.

The Longhorns are on a roll, beating Oklahoma in the quarterfinals by a score of 5-2. Freshman midfielder Lexi Missimo was recently named Big 12 Freshman of the Year, and is certainly playing to that level thus far in the Big 12 Conference Tournament. Missimo had three assists against Oklahoma, setting up freshman forward Trinity Byars for goal after goal.

Byars would finish the game with three goals to her name, taking the Longhorns one step closer to a Big 12 Title.

Texas recently played West Virginia on Oct. 21, tying the Mountaineers 0-0 in double overtime. The Longhorns will need to get the offense going against a stingy Mountaineers defense if they want to advance to the tournament finals and win the Big 12 Championship.

Texas women’s volleyball looks to continue its run of dominance in Waco against the Baylor Bears on Friday night.

Texas is coming off of a dominant two wins against Iowa State, winning 3-1 and 3-0 in consecutive games in Ames. Junior opposite hitter Skylar Fields and junior outside hitter Logan Eggleston continue to dominate, combining for 21 of Texas’ 39 kills last game against the Cyclones.

Baylor is one of the toughest matchups on Texas’ schedule, coming into the game as the No. 10 team in the nation. The Bears are led by senior outside hitter Yossiana Pressley, who leads her team in points per set and kills per set. Baylor also holds opponents to a .179 hitting percentage as a team, boasting an elite defense.

The Longhorns will have to continue to play mistake-free volleyball if they want to leave Waco with an unbeaten record, as the Bears will certainly give Texas a run for their money.

Texas football is reeling, coming off of three straight losses in conference play. While a conference championship might be off the table at this point, the Longhorns will look to play better against a 5-3 Iowa State team on the road.

Sophomore running back Bijan Robinson was held to his lowest rushing total of the season against Baylor, only rushing for 43 yards in the game. This is an aberration for a player that was hot on the Heisman trail only a couple of weeks ago. If Texas wants to end its losing streak, the Longhorns will have to get Robinson going on Saturday.

Texas has been susceptible to the rush this season on defense, so the Longhorns need to figure something out before Saturday to slow down the elusive Breece Hall and the Iowa State rushing attack if they want to come out of Ames with a win.

Texas basketball has its first official game on Tuesday, taking on Houston Baptist University at the Frank Erwin Center.

Newly hired head coach Chris Beard has been hyping up students over the course of the fall semester, involving the student body in his fireside chats on social media and encouraging strong turnouts for the new season.

Fans will be eager to see how Beard deploys his uber-talented group of transfers and returning talent on the court, as Texas boasts one of the most high-powered reserves of players in the country. Newly acquired junior forward Tre Mitchell put on a show in Texas’ exhibition game against Texas Lutheran, posting 16 point performance on 7-12 shooting, while fellow transfer and senior forward Timmy Allen put up a respectable 15 points along with four rebounds on the night.

If the exhibition game is any indication of Texas’ firepower, then Texas fans should look forward to even more success this season than last year’s Big 12 Championship winning team.