Revisiting Texas Football: Breaking down 5 plays from Texas vs. Baylor 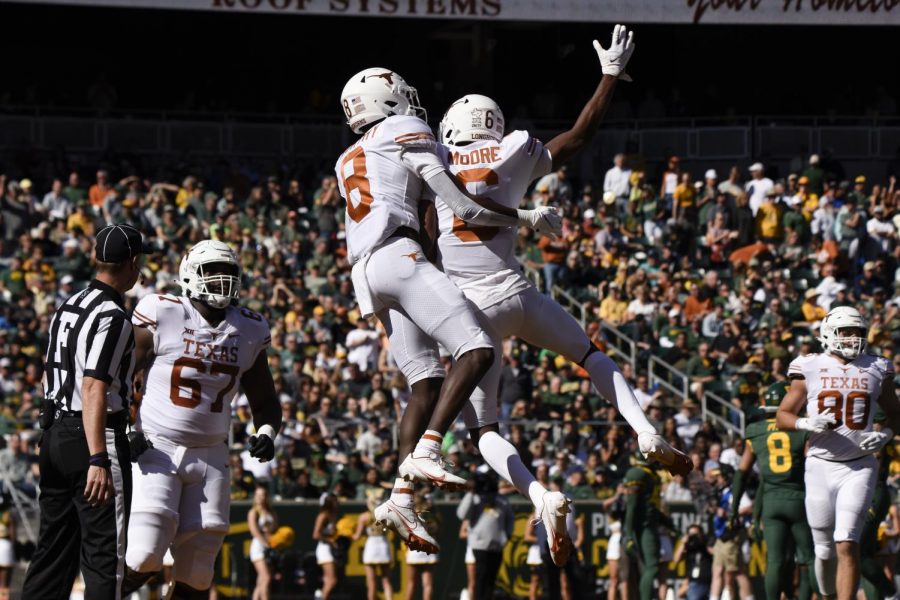 Texas couldn’t pull out a win against Baylor and fell short 31-24, falling to 4-4 on the season.

Here are the top five plays from Saturday’s game.

Baylor started the game with the ball. On the Bears’ first offensive drive, the team moved the chains efficiently to its 47-yard line. Texas drew a creative defensive look that it hasn’t done too often this year. The Longhorns defense showed they were bringing four but had one defender retreat into coverage.

Foster effortlessly picked off Bohanon and gave the offense an easy first drive to set up a future Longhorns touchdown.

Off the interception that the Texas defense set up, the offense had a favorable field position. It was third-and-four and Texas wanted an early lead. The Longhorns drew up a simple concept to get one of its top receivers open.

With the threat of running back Bijan Robinson decimating the Baylor defense, both of the Baylor linebackers collapsed down the middle. This left the middle of the field open for junior Joshua Moore to run a smooth slant route on the pressing Bears defender to the middle.

Texas quarterback Casey Thompson delivered an accurate pass that only Moore could’ve caught for a Longhorn touchdown. Texas jumped out to an early 7-0 lead.

3. Thompson has a Worthy connection

Winding down to the tail end of the first quarter, Texas was down by three points. The Longhorns and Bears were not making it easy for each other in the first quarter. Texas looked to punch Baylor in the mouth with another score.

Wide receiver Xavier Worthy lined up in the slot with a safety, who gave him six yards of cushion. This was too much space for Worthy and his electrifying speed. When the ball snapped, he exploded off the line and ran his route.

Thompson quickly recognized Worthy, who streaked up the field and threw a rainbow pass to him in the perfect position. The freshman receiver caught the ball and strolled into the endzone for a 63-yard reception catch, his longest of the day.

4. Moore does more than needed

Texas marched down the field into Baylor’s territory and was already in field goal range. With a small four point lead over the Bears, a field goal would’ve given them a small cushion of a touchdown lead.

Thompson dropped back in the pocket, and it started condensing almost immediately. He shuffled around in the dissipated pocket searching for one of his targets and threw a flick pass on the run to an open Moore.

Moore caught the ball and did a proficient spin move to avoid the first defender. However, after the spin, he was off-balance. When he was tackled by the next player, he fumbled the ball which Baylor recovered, leaving possible points on the board for the Longhorns, who would go on to need them.

Texas had played Baylor close the entire game. Up to this point in the game, the Longhorns hadn’t given up any big conversion that made the game out of their reach. But in this play during the fourth quarter, Baylor pitched the ball to its running back, Abram Smith, who had cut up the Longhorns defense throughout the whole game.

Smith received the ball and broke a tackle. All the Texas defenders were picked up by blockers, leaving the running back with an open path to run through. The last wall of defense Texas had was Foster. However, Smith sped past the safety and brushed off his tackle attempt to get a Bears touchdown.

This run took the hearts of the Texas team, and it didn’t recover from this deficit.