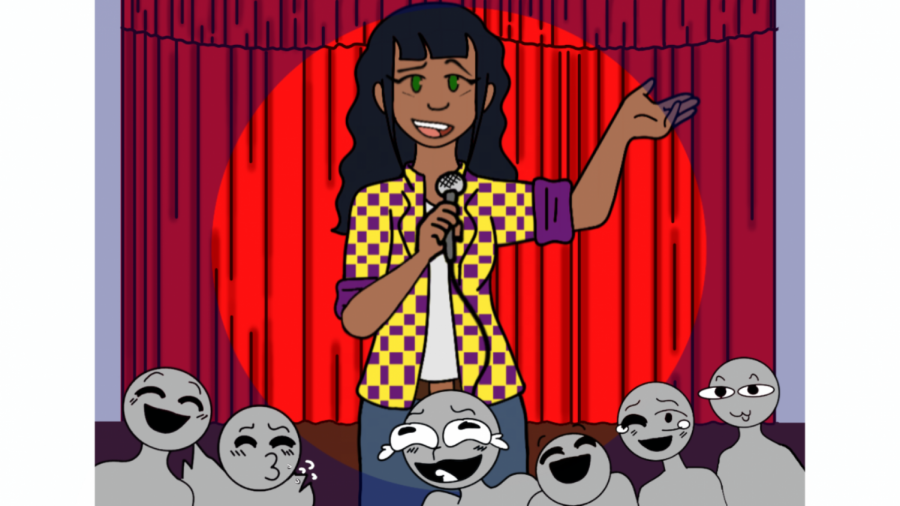 After performing a final stand-up routine for his elementary school talent show, Dakota Widenor boxed up his off-the-cuff puns and knock-knock jokes, thinking he ended his one man comic act. However, he recently came out of retirement, stepping back up to the mic and joining a stand-up group at UT.

This semester, radio-television-film senior Emily Koller launched Stand Up and Deliver, a stand-up comedy group affiliated with Texas Student Television. The group — a tight-knit band of comedy enthusiasts and performers — writes and edits stand-up routines in preparation for local open mic nights in the following weeks. Koller said for most members, Stand Up and Deliver offers a platform to learn, grow and perform stand-up for the first time.

“Anyone and everyone is very intimidated by doing stand-up comedy,” Koller said. “I (remember) my first time doing live comedy, more than half of the people in the audience were friends of mine, and I still was like, ‘Oh my God, what if nobody laughs? What if everyone hates me?’ It’s definitely a very daunting thing.”

Even before coming to UT, Koller said she knew she wanted to pursue comedy. However, after studying comedy and surrounding herself with fellow comics, Koller said her perspective on writing jokes changed over time.

“I realized that you could actually say something with comedy,” Koller said. “I have a few bits about mental health. I never thought … I could make jokes about (my mental health) and make other people comfortable with their own mental health issues, but it’s totally something you can do (with stand-up).”

“I’ve been a speaker my whole life because I have anxiety,” Morvant said. “Whenever you perform (stand-up), there’s always that anxiety that a joke isn’t going to land or that people get upset, but it’s just something you work through.”

However, by joining Stand Up and Deliver this semester, Morvant said he found a good place to rehearse comedy routines without fear of judgement.

Inspired by celebrated comedian political commentators like Stephen Colbert and Jon Stewart, radio-television-film senior Widenor said he wanted his routines to focus on cultural commentary. However, he said he wants to develop himself before talking about broad subjects like culture and life. Now, he writes more about his own specific experiences.

“Great comedy comes from a vulnerable place,” Widenor said. “Recently, I wanted to develop a stand-up (routine) where I talked about my (trauma) … It’s a serious subject, and it needs to be treated with respect, but at the same time, when you cover it up, it creates an issue where we can’t discuss these subjects in a manner that allows us to heal.”

Widenor said he hopes sharing his personal stories will help others reflect on their own experiences.

“There’s a basic (human) drive to gather around a campfire and tell stories,” Widenor said. “There are a lot of talented comics who are able to go to a deeper level. Life is so serious … and just laughing about something can be really therapeutic for a lot of people.”