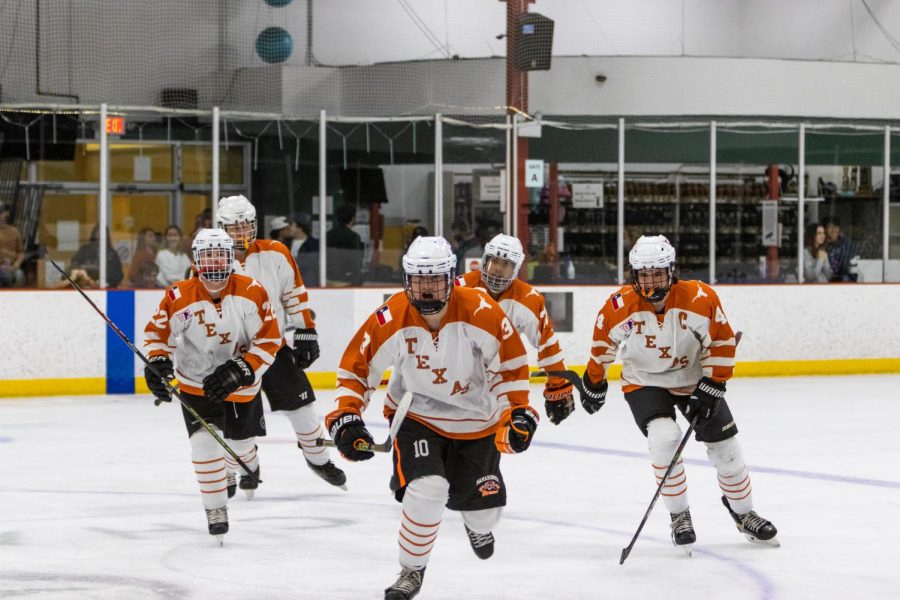 Senior Tommy Wehmann is a rarity in Austin.

Moving to Texas in 2018 came as a shock to Wehmann who was used to a different hockey environment in his hometown in Minnesota.

“A good indicator of that is just how many rinks there are,” Wehmann said. “There is usually one or two for a big city down here and usually every high school up there has one.”

Having fond memories visiting his brother’s godfather in Austin drew Wehmann to Texas, and in an effort to continue playing the sport he loved after high school, Wehmann joined the Texas ice hockey team as a defenseman.

A club sport under the UT RecSports Department, Texas ice hockey is currently playing its 21st season of play.

“I think it’s a growing thing here in UT,” Wehmann said. “I feel like I get less and less, ‘We have a hockey team?’ when I tell someone I’m on the hockey team.”

The biggest draw on the schedule each season are the games against Texas A&M in the annual Texas Pride Cup. With students showing up in higher numbers for the games, the Texas Pride Cup has served as one of the main ways the bitter rivals have been able to settle the score since the 2011 conference realignment.

Unaware of the 117-year rivalry, Wehmann felt unsure about what to expect when he played A&M for the first time. The defenseman feared club games would equate to an uncompetitive environment and lack of player seriousness.

It did not take long for Wehmann to realize how passionate the fans and players of both schools were.

“They love the rivalry just as much as us,” Wehmann said. “You play each other enough where you almost have individual rivalries against their players, which just adds to the experience in general.”

Senior forward Armaan Jivraj’s interest in hockey first started when he was 6 years old. The Houston product would watch his European neighbor rollerblade outside and quickly persuaded his parents to buy him a pair of his own. A few years later, the neighbor gave Jivraj all of his hockey gear.

An ice rink soon opened up next to his house, which aided in Jivraj’s decision to try out for the hockey team and play for his high school team.

A Dallas Stars fan, Jivraj fondly remembers the A&M game at the Cotton Bowl his sophomore year. The team watched the Stars play and then competed on the same rink the day after.

Governed by the American Collegiate Hockey Association, Texas ice hockey competes in the Texas Collegiate Hockey Conference. Remaining games at the Chaparral Ice Center include games against Texas State, ETBU and Texas A&M, among others.

“Obviously, you wish you had more fans and awareness,” Jivraj said. “But it’s a fun sport all around. … The more people we get out to the games, the more fun it’ll be for everyone.”