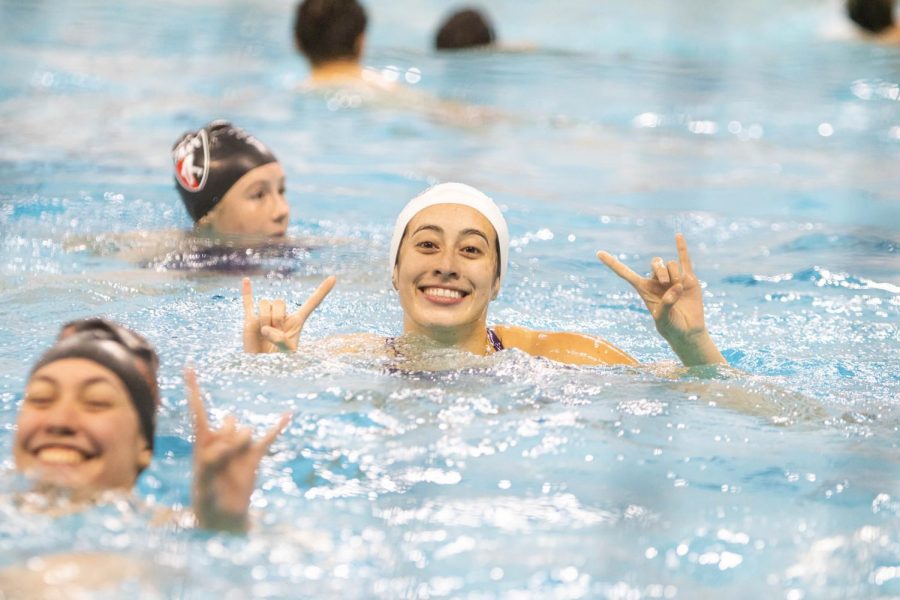 A rush of cold hits Natalie Aquinosisk’s face as she jumps and cuts through the surface of the water. Like a flipped switch, the only thing on her mind is the game ahead. The stress of a bad day subsides and drifts away on the ripples left in her wake.

“After I’ve played, (I am) energetic,” Aquinosisk said. “I’m ready to conquer the world.”

Playing water polo serves as a stress reliever for the neuroscience freshman, who recently joined the UT club team. As they gear up for the spring season, meeting twice a week for late-night practices, the UT RecSports women’s water polo team shares Aquinosisk’s enthusiastic sentiment.

The team mostly consists of newcomers, but Lucy Moran, co-captain and junior English major, said new players help with team collaboration in and out of the pool.

“We are kind of rebuilding this year,” Moran said. “It’s really useful to be able to start from the beginning and start fresh.”

Moran makes a point to host frequent girl’s nights and potlucks. She said she hopes the team will feel like a family, especially with a majority of players being new.

“There’s a great dynamic in practice,” Moran said. “(It) has been really important to me to make sure that as captain I am encouraging that and helping (the team) grow.”

Each practice and scrimmage leading up to the spring season offers a chance to work on team building, said sophomore biology major Magaly Ruiz. She said she can’t wait to see the group’s achievements and feel the added adrenaline of an actual match.

Ruiz describes the team as versatile because members can play multiple positions. They’ve even tossed around the idea of gracing this year’s team shirts with a melting pot — a fitting team symbol.

“Slowly, our team chemistry is finding its rhythm,” Ruiz said. “Everyone brings something different to the table, and it’s meshed really well.”

While COVID-19 made it difficult to continue many of the spirit traditions of prior years, Ilayda Dussetschleger, club president and second-year graduate student at the LBJ School of Public Affairs, sees this year as a chance to implement new ones. This past month began the first of many “Belly Flop Fridays,” where players videotape each other belly flopping into the Lee and Joe Jamail Texas Swim Center pool and post clips to the team Instagram each week.

“It’d be fun to create more traditions,” Dussetschleger said. “Our plan by the end of this semester is to do a really fun (video). (Maybe everyone will do) domino effects, but we’ll see how that goes.”

While most tournaments for the team bring them to different places where the benches are packed with parents from other schools, the girls hope to see more familiar UT faces in the future. Despite the current lack of community support, spirits run high and the team looks forward to a successful season.

“It’s always good to have the occasional orange T-shirts in the crowd cheering us on,” Dussetschleger said. “But, even if we don’t, we’re still going to kick butt.”