3 takeaways from the Longhorns blowout loss in Ames 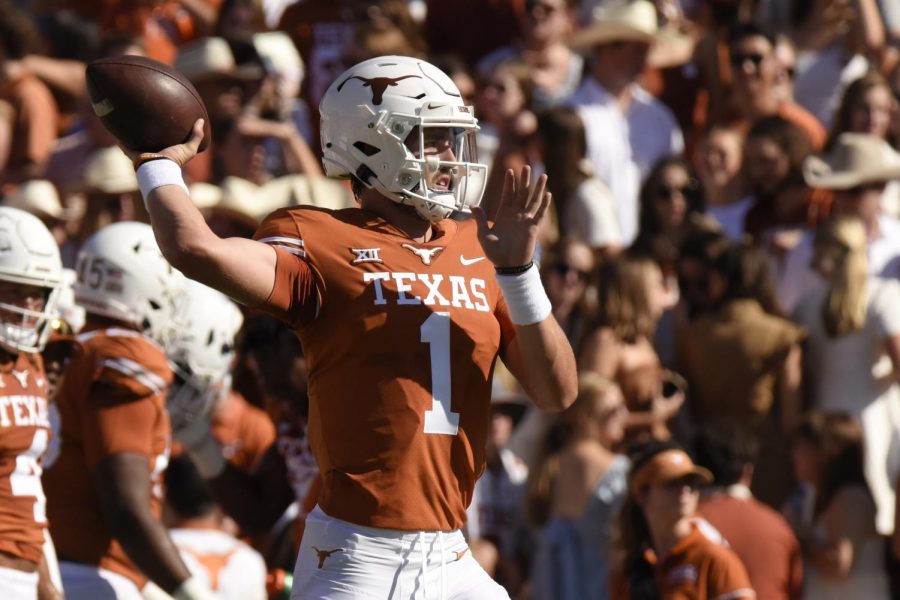 Rock bottom. The Longhorns haven’t won a game since Oct. 2. They have found ways to lose games in unimaginable ways. Saturday night’s 30-7 loss in Ames, Iowa, however, felt like rock bottom for this team, not because of bad play design, poor execution nor lack of talent. Instead, Texas looked like a football team who was completely disinterested in competing; a team that quit on its first-year head coach.

Here are three takeaways from the Longhorns’ loss to Iowa State:

After redshirt junior quarterback Casey Thompson struggled throughout the first couple drives of the game, head coach Steve Sarkisian decided to make a change and thrust redshirt freshman quarterback Hudson Card into a difficult spot. On the road, in a hostile environment, Card  played his first meaningful snaps since Texas’ blowout loss against Arkansas.

Card’s performance was underwhelming, throwing for a mere 101 yards and a touchdown on a touch pass to freshman receiver Xavier Worthy, who continues to be a standout. Card threw for 4.4 yards per pass, as he was hesitant to push the ball down the field. He missed Worthy on a deep shot early and never seemed to recover, resorting to a plethora of checkdowns. Card needed to escape the pocket constantly due to the poor performance of the offensive line, who surrendered five sacks.

He wasn’t ready for the moment, but Sarkisian was desperate to try anything to give the Longhorns some sort of spark. Outside of a 14-play, 78-yard touchdown drive, Texas was completely incompetent offensively. Sarkisian needed to figure out the problem with his offense, but the solution was not Hudson Card.

Breece Hall wins the battle of the star running backs

One of the storylines heading into Saturday’s contest was the battle between the two running backs. Sophomore Bijan Robinson has established himself as a rising superstar, while the veteran junior Breece Hall has been producing at a high level for a long time. Hall was bottled up throughout the first half due to the Texas defense’s strong performance.

Hall’s 47-yard touchdown to start the second half opened the floodgates for the blowout. He made multiple Longhorn defenders look silly with their tackle attempts, showing why he is one of the best running backs in the country. After finishing with 136 yards rushing and two touchdowns, Hall has now scored a touchdown in 21 consecutive games.

On the flip side, Robinson had a tough night. The sophomore finished with 90 rushing yards on 18 carries. He fumbled the ball twice and failed to reach the end zone for the first time this season. Robinson had taken a beating throughout the game, resulting in his early departure due to suffering a neck strain. One of his best traits also happens to be one of his worst. His refusal to go down showcases his competitiveness and heart but also exposes him to unnecessary hits.

Saturday’s loss felt like a backbreaker for this Texas team. The Longhorns looked defeated before the first snap. Staring down the barrel of the program’s longest losing streak since 2010, the players came out and played completely flat on both sides of the ball.

What is concerning is the lack of progression the Longhorns have made. Being a young team, the hope and expectation was for growth through experience. Handling adversity is just as important as mastering the X’s and O’s. Texas’ lack of mental toughness has been disappointing, and that is on the coaching staff as much as the players.

Texas is facing the possibility of missing bowl eligibility for the first time since 2010, needing two out of three wins as the team heads home next Saturday to face the 1-8 Kansas Jayhawks. Questions will be asked about Sarkisian and if his first season damages his ability to recruit at a high level. Sarkisian still isn’t sure who he wants at quarterback, and the defense has only flashed signs of improvement. The offensive line is a major issue, which won’t be fixed overnight. His first season as head coach can only be described as an unequivocal failure.