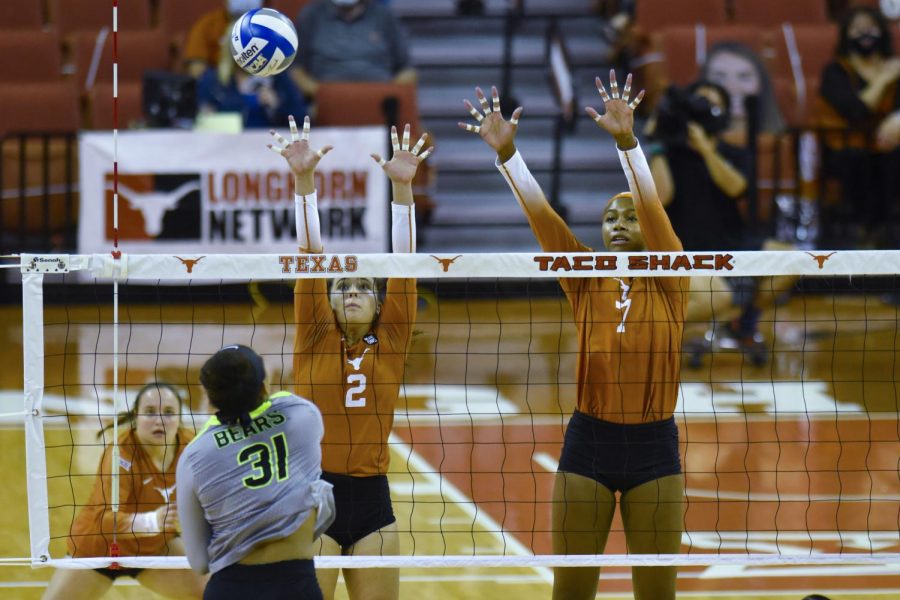 Texas volleyball fought to the end. In a match with nearly equal Baylor and Texas fans and a crowd atmosphere that resembled a football game, the Longhorns just couldn’t get a grasp on enough momentum to top the electric Baylor Bears at the Ferrell Center, falling 3-1 in their first loss of the season.

The Longhorns were fresh off a sweep of Baylor. On Friday night, Texas recorded 12 service aces and held the Bears to a .274 hitting percentage, making their win against the No. 10 team in the nation look easy.

Baylor came into Saturday’s match with a chip on its shoulder. Texas has historically dominated the Bears, leading the series 86-3 and trumping them as Big 12 frontrunners since 2007.

Texas did a lot of things right. The middle blocker tandem of Brionne Butler, Asjia O’Neal and Molly Phillips dominated yet again from the front row, recording 18 kills and 15 blocks. Junior Logan Eggleston had a season high 23 kills, and setters Jhenna Gabriel and Saige Ka’aha’aina-Torres combined for 44 assists and a pair of blocks.

However, the Longhorns’ serving kept the offense from gaining any real traction. On Saturday, the Longhorns were only able to muster two service aces compared to 20 service errors.

“We didn’t serve as tough as we did last night,” Eggleston said. “They were a lot more in system and I think that was the big difference.”

In the first set, the Longhorns were overwhelmed early by the Baylor offense. Following a Texas service error, the Bears went on a seven-point scoring run spearheaded by Baylor All-American Yossiana Pressley to extend their lead in the set. While Texas was able to mount a small comeback and prevent six set points, Baylor just edged out the Longhorns 25-23.

Texas kindled their fire from the first set to dominate the second set. Following a string of Baylor attack errors, Eggleston led the charge with seven kills to win 25-18.

While the Bears were able to trump Texas 25-20 after a three-point scoring run in the third set, neither team gained a lead of more than two points in the fourth. With the intensity of the crowd surging in the wake of Baylor and Texas’ back-to-back scoring, neither team was able to catch enough momentum to decisively take the set.

“We did a good job at the end of the sets fighting back and not focusing on the last play, but the future and what we could do to win the game,” Eggleston said.

The tail end of the set became a slugfest. To keep their dream of an undefeated record alive, Texas survived six match points before falling to Baylor 32-30 on a Skylar Fields attack error.

With the loss, the 18-1 Longhorns will likely drop to No. 2 in the AVCA rankings behind Louisville. But head coach Jerritt Elliott is optimistic about the future.

“We control our own destiny,” Elliott said. “We’re gonna win the next six.”

Texas volleyball has a chance at redemption Thursday night when the team takes on Oklahoma at home.