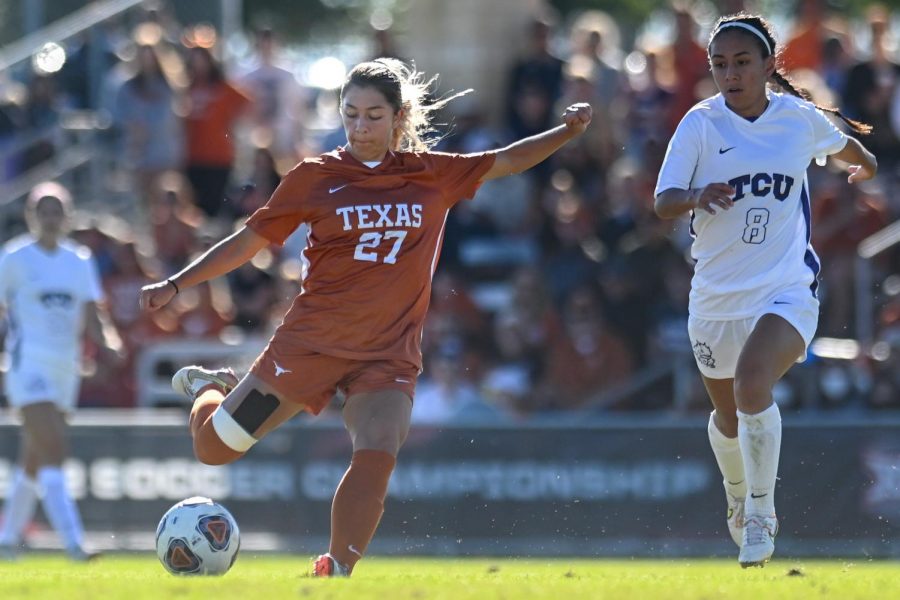 In a highly competitive contest against TCU, the Longhorns thought the game was headed to overtime, like their last matchup: A 1-1 draw on Sept. 30.

But, with less than 10 minutes to go, the Horned Frogs were in the right place at the right time.

As a TCU player raced forward with the ball down the right side of the field, a trio of Horned Frogs linked up, moving the ball quickly from the far outside of the box toward the middle of  the goal.

Longhorn defender Lauren Lapomarda tried to send the ball out of play from TCU freshman forward Cam Lancaster as senior goalkeeper Savannah Madden went for the ball as if it was a shot. But it didn’t go out of play, instead returning to Lancaster, who buried a shot into the wide-open net as Texas fell late, 2-1.

At the Round Rock Multipurpose Sports Complex on Sunday, No. 20 Texas had an opportunity to capture its first Big 12 Tournament championship since 2007 and its first under head coach Angela Kelly.

TCU came into the contest as the No. 1 seed, winning numerous accolades and most importantly the conference regular season title. The Longhorns didn’t come in with as much hardware as their opponents. Instead, they carried a program best 14-game unbeaten streak.

Unfortunately for Texas, it is not about how you enter the match, but how you finish: They couldn’t manage to keep their lead, losing a close one in regulation.

In the first half of the contest, the Longhorns had their front foot forward, dominating possession and getting quality chances left and right. In the opening seconds of the match, senior midfielder Julia Grosso raced through the disorganized defense.

Making her way into the box, Grosso dribbled quickly before sending a powerful shot toward the goal that just missed the mark.

Texas constantly found itself in and around the 16-yard box sending shot after shot at the goal but could never quite hit the mark until freshman midfielder Ashlyn Miller decided to take a chance in the 39th minute.

Dribbling toward goal, Miller didn’t see anyone in front of her and decided to take a shot from outside the box. Putting her force behind the ball, Miller sent it curving into the side netting, sailing right over the TCU goalkeeper’s outstretched arms to make the score 1-0.

Going into halftime up 1-0, the Longhorns were in prime position to win the tournament, but Eric Bell, Big 12 Coach of the Year, had other plans. Making key adjustments in the locker room, TCU looked like a different team for the last 45 minutes.

Throughout the majority of the second half, the Horned Frogs dominated possession of the ball and pressed the Longhorns into uncomfortable situations.

Realizing that their tactical changes worked, TCU managed to capitalize, scoring two unanswered goals that would ultimately carry them to a 2-1 victory.

TCU has now finished in front of Texas for both the regular season and conference tournament titles. Although the Longhorns might not necessarily enjoy losing out on Big 12 titles to the team from Fort Worth, the NCAA championship is still the most important goal ahead of them.

Monday is when the Longhorns will find out whether they will receive an at-large bid for the NCAA tournament. If the selection committee looks at how much the team has improved since the beginning of the season, then Texas might just make a run at the title.