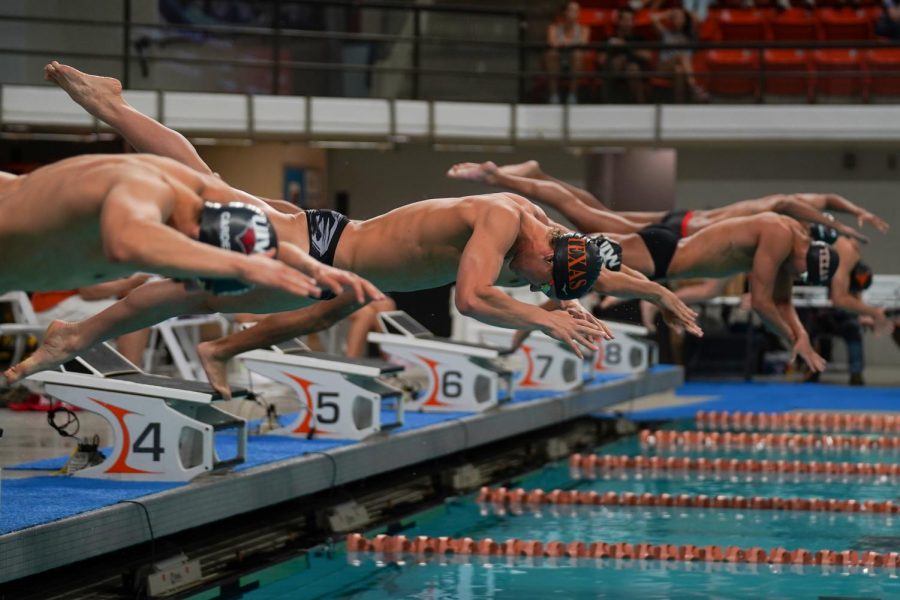 Continuing their undefeated season, the No. 1 Texas men’s swim and dive team shattered records in an exceptional performance against No. 9 Virginia in Charlottesville, Virginia, this past Friday and Saturday.

The Longhorns competed in a series of events spread out across the two days and earned four of Virginia’s pool records, along with their third team win of the season.

One swimmer that made some impressive waves was sophomore Carson Foster, who achieved several individual accomplishments, including breaking the pool record and nationwide all-time record for men’s 400 IM in a dual meet with a time of 3:40:48. Foster beat the previous fastest time of 3:41:49 that was set by Olympic swimmer Chase Kalisz back in 2016, making Foster the second-fastest performer in the country.

Following this historic moment, Foster went on to top Olympic medalist Ryan Lochte’s pool record for the 200-yard backstroke with a time of 1:42:14, which also happens to be the fastest time in the nation for this season.

The team soared to new NCAA season bests, starting the weekend with a first place win in the 200-yard medley relay performed by seniors Daniel Krueger and Alvin Jiang, junior Caspar Corbeau, and freshman Anthony Grimm. The four claimed the third-fastest time in the NCAA this season (1:25:92), and snatched another first place title during the second day in the 400-yard medley relay with a winning time of 3:09:47.

Krueger worked his way up the NCAA ranks again in the 50-yard freestyle, taking the fifth best time and winning his first individual event of the meet. The senior also joined his teammates Drew Kibler, Caspar Corbeau and senior Cameron Auchinachie in the 200-yard freestyle relay to end the weekend with another pool record time of 1:18:61.