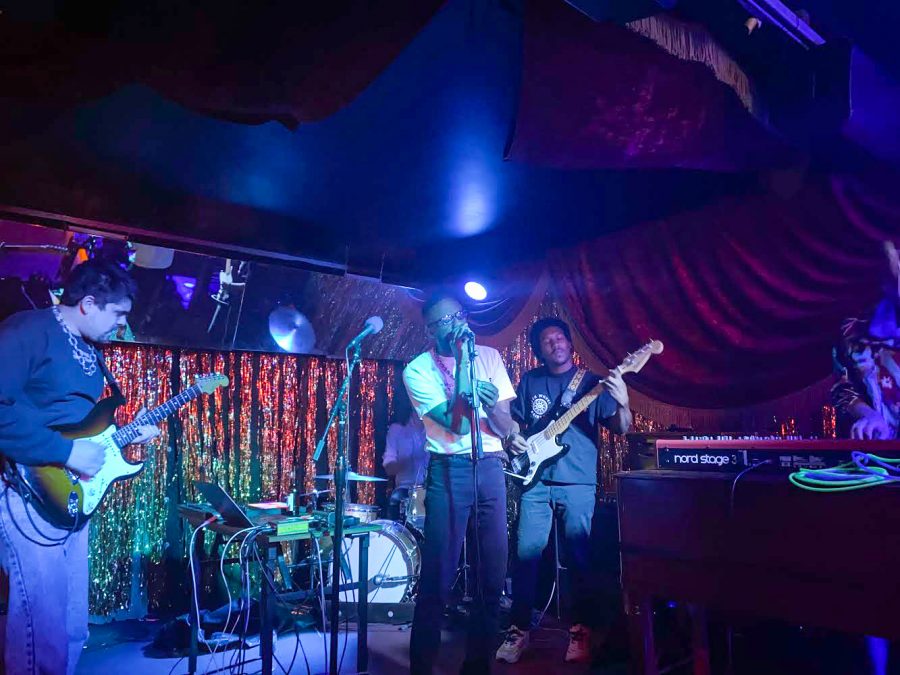 Except for the red and white patterns adorning the door and windows, C-Boy’s façade seems relatively unassuming. However, the interior’s distinctly retro style with music memorabilia plastered on the walls gives the club the aura of a bygone era, though the spot opened in 2014.

Angel White, a Dallas-based singer-songwriter, donning a cowboy hat and a blue kerchief, opened the night with a soulful set of pared-down ballads accompanied by guitarist Saint Austin. White’s understated crooning works in tandem with the raw, clean tone of Austin’s Gibson SG, creating an intimacy with the less than 100 listeners. The track “Who Is Jesus?” begins with a showcase of the frontman’s pure vocal tone and showcases Austin’s subdued finger-strumming, making for an unforgettable slow burn.

The end of White’s set gave way to thunderous applause and a short intermission as Brown’s backing band situated themselves on stage. Brown sat to the left of the stage as KUTX host Aaron “Fresh” Knight thanked the crowd and introduced the Bastrop-native performer. The rhythmic yet thunderous beat of the snare blared as the rapper made his way to the stage, confirming the tonal shift between the energetic headliner and the far more laid-back opening act.

Regardless of one’s musical preference, live instrumentation always makes for a powerful concert experience. Brown proves to be an adept musician, morphing and amalgamating genres, incorporating rock, hip-hop and R&B into his performance. The charismatic lyricist exudes confidence and swagger on stage, grooving with his guitarist and riffing with the band through his soundboard. References to societal woes, the Texas music scene and his upbringing in Central Texas inform his witty and smooth lyricism. The seamless transition from his flow to singing displays Brown’s range and fine-tuned musicianship.

Brown’s performance feeds off the energy of the crowd and given the clinic he put on at C-Boy’s, he performs like he’s in front of thousands rather than 80 people packed into the eclectic club. It’s no wonder he’s drawn the interest of KUTX, ACL Festival and NPR Live Sessions; his showmanship and lyrical virtuosity set him apart from contemporaries. If you find yourself without plans on Thursday nights in November, head down to C-Boy’s for a performance from one of Bastrop’s finest.