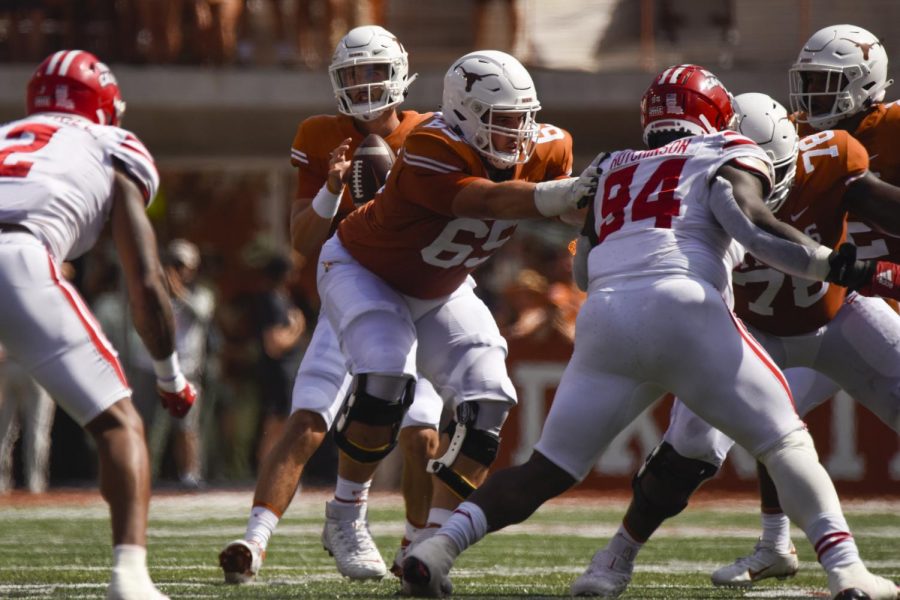 Texas football’s recent four-game losing streak is exposing what head coach Steve Sarkisian has known since the Longhorns’ week 2 struggles against Arkansas: Texas’ offensive line is holding the offense back.

Largely due to the struggles of the offensive line, Sarkisian failed his first major tests of his time at the helm of the football program in losses to Oklahoma, Oklahoma State, Baylor and most recently, Iowa State.

But his next important test isn’t in the next game or on the practice field— it’s on the recruiting trail for the offensive line.

The Longhorns signed only two offensive linemen up front in the 2021 recruiting class, which Sarkisian called a “real rarity in recruiting.” They only have two currently signed for the 2022 class in an already-thin position that will get even thinner.  Three out of the six starting offensive lineman — guards Denzel Okafor and Tope Imade and tackle Derek Kerstetter — are sixth-year super seniors.

But his offensive play calling and creative scheming worked largely because of an elite offensive line group, including current NFL players Jedrick Wills Jr., Jonah Williams and Landon Dickerson, among others. In his first nine games as a Longhorn play caller so far, poor offensive line play has stopped the offense from getting going before it even starts, resulting in three-and-out after three-and-out due to poor pass protection and run blocking.

So, this upcoming offensive line recruiting class will make or break Sarkisian’s offense at Texas.

“There’s a fine line in all of this,” Sarkisian said. “If you want to settle on (offensive) linemen, we could probably get five linemen tonight, by tonight.”

Securing three out of those four commits, especially with tackle depth lacking, would be a saving grace for offensive line coach Kyle Flood, who left Alabama for Texas alongside Sarkisian.

The pitch to those recruits is simple: Come to Texas, and you’ll get playing time early and often.

“There’s (a) great opportunity moving forward for a kid coming in as a freshman because of the lack of depth there in last year’s recruiting class. There’s no doubt we need to sign at minimum five guys in this class, but we want to make sure we’re signing quality players, not just filling the roster spot.”

But just because the pitch is simple, that doesn’t mean it’s easy. Sarkisian and Flood failed to convert on their first opportunity to build the offensive line of the future, albeit with a shortened recruiting schedule due to the hiring.

“For various reasons — you have a coaching change, you have things happen when the last staff was here, and who was available —  we only ended up signing two guys,” Sarkisian said.

This second go-around, Texas will need at least five players, and five of the right players, according to Sarkisian’s standards. Whether or not he and Flood can convert in the 2022 recruiting cycle could mean the difference in whether they’re still Texas Longhorn coaches in a few years.