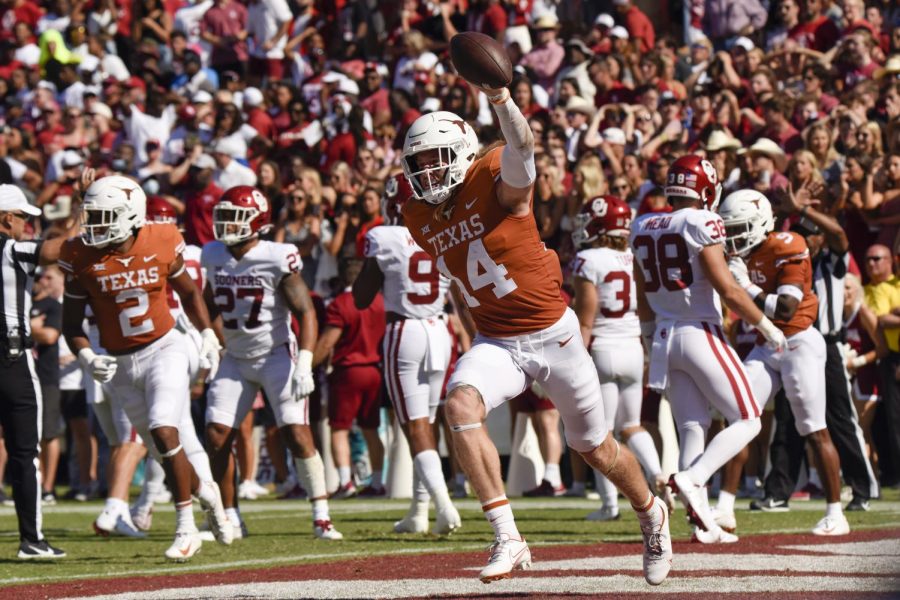 The headline is everywhere: Texas has lost four straight games for the first time since 2010. The Longhorns looked dazed and confused the entire game last Saturday in Ames, Iowa, only putting up one touchdown against Iowa State’s 30 points.

The one thing that remains consistent for Texas is the first half defense. The Longhorns held Iowa State to just 40 yards of offense and three points in the first half. Senior defensive back Josh Thompson had excellent coverage and broke up the Cyclones’ first touchdown attempt.

Senior Brenden Schooler was all over the field. The super senior recorded 12 tackles, the most in the game for the Longhorns. After transferring to Texas and making a brief showing at wide receiver, Schooler switched to defense and has continually stepped up his game through the season.

Texas’ offense is lost. The Longhorns had their second worst rushing game of the season at 104 yards. Texas lost 37 yards on the ground, partially due to five sacks. The passing game suffered the most, as it has all season. With a meager 103 yards, Texas threw for almost a third of the yardage that Iowa State did. To top off a poor performance, the Longhorns committed seven penalties for a loss of 64 yards.

Neither quarterback could get the offense moving. Redshirt junior Casey Thompson started the game but was pulled before the end of the first quarter. In the four drives that Thompson led, Texas netted just 11 total yards. Redshirt freshman Hudson Card stepped in but led only one successful drive that resulted in a touchdown in the middle of the second quarter.

The second half embarrassment occurred yet again. After scoring only one touchdown in the second quarter, Texas was completely shut out. The Longhorns had negative yardage on the next three consecutive drives following the touchdown. Other than the fumble in the beginning of the fourth quarter, Texas punted away after every offensive attempt. While the offense couldn’t make anything happen in the second half, the Longhorn defense gave up 27 points finishing the game with a 23-point deficit.

Injuries are piling up and causing more worry for the already struggling Texas team. Senior linebacker DeMarvion Overshown, sophomore running back Bijan Robinson and sophomore defensive lineman Alfred Collins all left the game due to injuries and their status is being monitored on a daily basis, per head coach Steve Sarkisian. Texas sorely misses Jordan Whittington, redshirt sophomore wide receiver, who has now missed three games due to a clavicle injury.

Even with the losing record, Texas head coach Steve Sarkisian remains optimistic about the remainder of the season. Sarkisian admitted Iowa State was the better team on Saturday, but he said his team battled through the entire game.

“We don’t have time for feeling sorry for ourselves,” Sarkisian said. “This has been a long month of some grueling losses and our guys continue to come back and fight back.”

The immediate future for Texas looks bleak. The Longhorns need to win two of their final three games in order to secure a bowl game. The Kansas Jayhawks have only one win on their record, so the matchup this Saturday at Darrell K Royal-Texas Memorial Stadium could provide an opportunity for Texas to get back on track and end its losing streak.