Kyndall Hunter lights it up in the first half, leading Texas past New Orleans 131-36 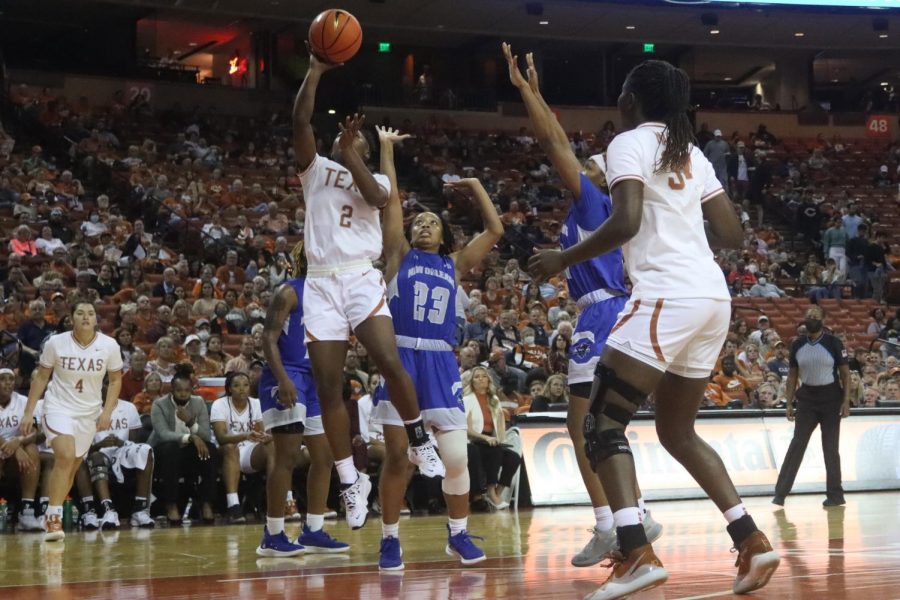 With 10 seconds left in the second half against the University of New Orleans, freshman guard Kyndall Hunter sat on the wing, as junior guard Aaliyah Matharu patiently scanned the floor for an open teammate.

When Matharu finally found her fellow guard on the wing, Hunter rose up and knocked down a heat check shot — the seventh three-pointer in the first half.

It was that kind of game for Hunter, who just couldn’t miss in Tuesday night’s season opener for the Longhorns, scoring 27 points with 21 of them in the first half against the Privateers.

“It was pretty good when your teammates get you wide open,” Hunter said.

Texas had its foot on the gas from the start of the game, leading 17-0 throughout the first five minutes. New Orleans was having all kinds of trouble getting past halfcourt with the Longhorns’ tough full-court press.

No. 25 Texas continued to pounce on New Orleans in the full court and controlled the pace throughout the game, leading to a 131-36 blowout win for the Longhorns.

“I thought New Orleans played extremely hard,” Texas head coach Vic Schaefer said. “But they just caught us tonight on a night where we were ready to roll.”

Texas’ defense was firing on all cylinders against New Orleans, forcing 38 turnovers and only allowing 36 total points. The Longhorns continued their game plan of running the full-court press, and New Orleans could not figure out how to get past it.

Freshman forward Latasha Lattimore continued to anchor the paint on the defensive end, recording a vicious block midway through the third quarter, leading to a Texas fastbreak. The Privateers scored just eight points in the paint thanks to Lattimore’s efforts in the paint on defense.

“Latasha is coming, y’all,” Schaefer said. “What I saw her do tonight defensively is what I’ve been trying to get her to do, alter shots and block shots.”

For freshmen, help defense is not even a thought process in their high school career, and so getting young kids to learn to play defense like we want to play and be there to help and understand all that is usually the last thing that comes, but what I saw her do tonight on help defense is what I’ve been trying to get her and all of our bigs to do.”

Not only was the defense clicking, Texas’ offense was also in a groove against New Orleans, scoring the second-most points in a game in program history with 131. Hunter was the star of the show, hitting seven threes in the first half and leading both teams in scoring on the night.

The Longhorns also got some great minutes from junior guard Joanne Allen-Taylor, who scored 15 points on 5-12 shooting. Allen-Taylor made some great plays on the boards as well, recording six rebounds on the night, including two offensive rebounds.

Texas starts the season off showing incredible poise on the defensive end and shooting lights out on offense.

The Longhorns will look to improve their record and gain momentum as they face No. 3 Stanford on Sunday.