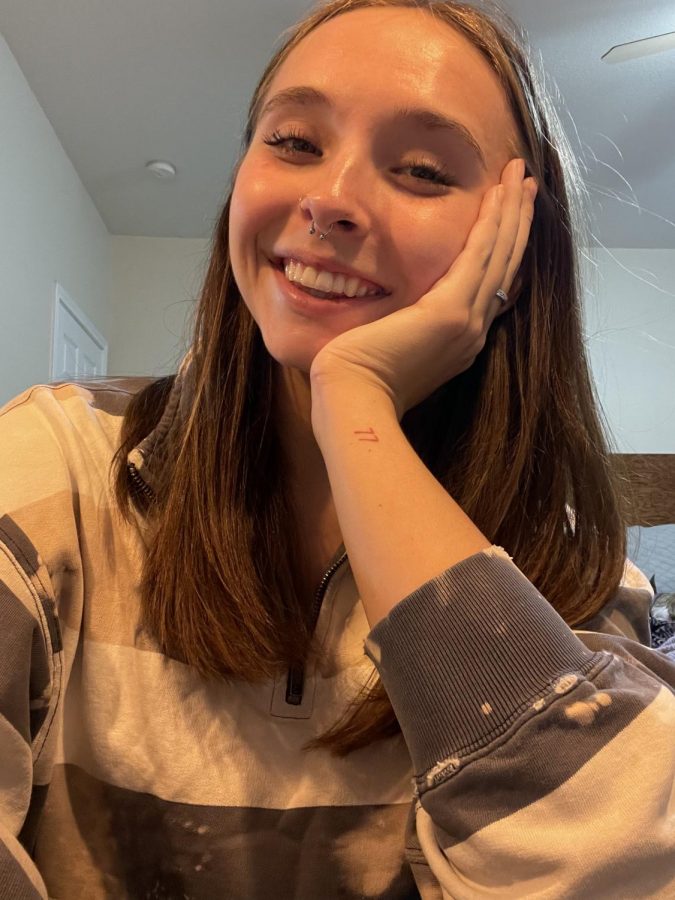 As a three-year-old, Madalynn Edward’s sprinted outside her house to escape a kitchen fire. Her father followed, still clutching the frying pan he was using to cook. With the wind blowing heavily, grease from the pan splattered on Edwards’ legs. To stop the sizzling, a family friend sprayed water from a hose, but the water sealed the grease to her skin as it burned her left ankle to the bone.

About 15 years later, she commemorated this experience with a red flame tattoo on her skin graft.

“This one’s probably one of the most meaningful (tattoos),” nursing junior Edwards said. “(The doctors) told my parents I would never walk again because the nerve damage was so bad.”

After defeating the doctors’ grim predictions, Edwards got the flame tattoo, along with three others, to honor her progress. Growing up Christian, Edwards said she wrestled with the contrasting ideas of appreciating tattoos and believing they’re sinful. Now, she has found beauty in tattoos and said she disagrees with people who judge them.

The number 77 decorates the outside of Edwards’ left wrist in red ink, representing a Bible passage where God commands his disciples to forgive one another 77 times.

“(My tattoos are) a really fun conversation starter because people see (them) and they’re like, ‘Oh, what’s that?’ especially because (two of them are) in red,” Edwards said. “They stand out a lot more, so people are always super interested.”

Edwards got all her tattoos in fall 2019. On her toe, she sports a daisy tattoo to match with her mom. Tattoos feel like a family affair as her mom took her to get her first tattoo, a butterfly that spans across her left rib cage. Still, Edwards said she didn’t know how her grandfather would react. She thought his Christian faith would lead him to disapprove of her tattoos.

“I was really nervous to show my grandparents because my grandpa’s a pastor,” Edwards said. “They’ve never said they don’t like tattoos, but I was just nervous … but they loved it.”

Not everyone accepts her tattoos as eagerly. The School of Nursing handbook prohibits visible tattoos in clinical settings. This means Edwards has to cover her 77 tattoo with her watch when she goes to St. David’s Medical Center for classes.

“They’re like, ‘Oh, you can’t have a wild color hair, you can’t have nails, no tattoos, no piercings, but some of the other nurses there have them, so I’m like, ‘Why are y’all imposing this rule on us?’” Edwards said. “One of our professors was like … ‘I’ve been trying to change it … but they’re not budging,’ and I was like, ‘Interesting. That’s very conservative and traditional of them.’”

The handbook states tattoos “detract from a professional image,” but Edwards deems this an unfair presumption.

“Tattoos are not unprofessional,” Edwards said. “They should not be used as something to discriminate against people. What’s on my body does not affect how I take care of my patients, how much I care for my patients or the way I communicate with my patients.”