Offense is the best defense: How Texas volleyball’s serving can make or break season 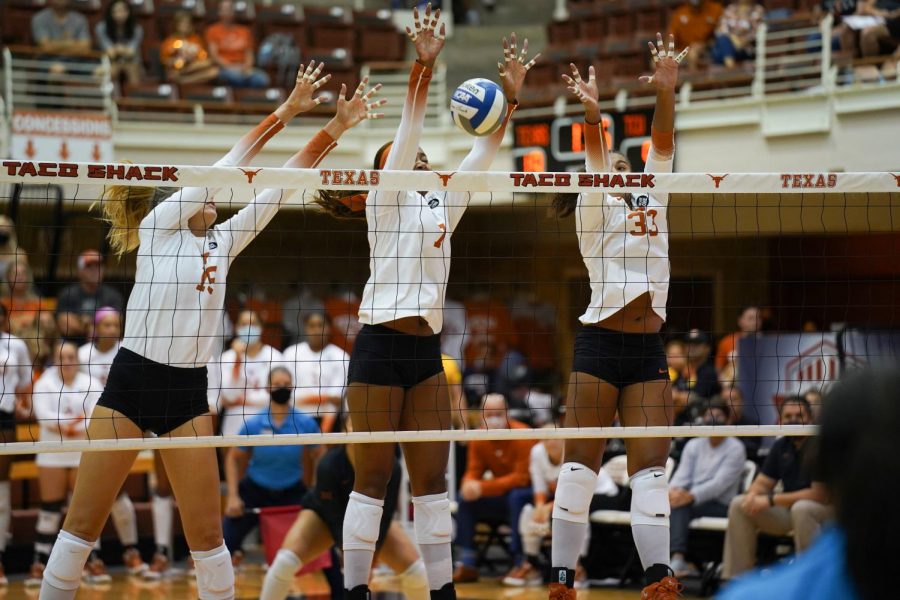 Texas volleyball head coach Jerritt Elliott often claims that domination at the serve and pass game is the cornerstone of their success.

On Saturday, Texas’ lack of prowess at serving handed them their first loss of the year against No. 10 Baylor.

Over the course of the season, the Longhorns have been lethal from the service line, ranking second in the nation in aces per set with 2.22 aces. In their sweep against Baylor on Friday night, Texas sunk 11 aces with 12 service errors to keep Baylor out of system and overwhelmed at the pass game.

However, in their 3-1 loss to Baylor the following night, Texas was unable to capitalize on stellar blocking by the front row and commendable sideout scoring. The Longhorns accumulated a shocking 20 service errors while only recording four aces.

“(Serving is) how (we) fell apart tonight, which was really good last night,” junior outside hitter Logan Eggleston said following the loss at Baylor. “I think if we continue to get ourselves over the net and are super aggressive, we’re gonna do really great things this year.”

For Texas, amassing many service errors is not out of the ordinary. Because Elliott has been prioritizing tough serving for the season, there is naturally going to be a greater margin of error. The strategy has worked for the bulk of the season, with opponents constantly kept out of system and scrambling to keep rallies alive.

The Longhorns just weren’t able to meticulously place serves like they normally do in the loss. Baylor’s poise during Texas’ serving threw the Longhorns into reactive, defensive game play to keep rallies alive.

Serving is essential to Texas’ domination in the NCAA and will continue to be essential going into the playoffs. Typically, the team who wins the serve-and-pass game is usually the team who comes out of the match with a win.

In other words, offense is the best defense.

If the Longhorns want to return to the national championship, more of their serves need to have their opponents scrambling.

While Texas still sits atop the Big 12 at 18-1 for the season and 9-1 in conference play, the dropped match caused the Longhorns to drop out of the No. 1 ranking in the American Volleyball Coaches Association poll for the first time this season. To regain the No. 1 spot, Louisville will have to drop at least one of their remaining matches, and Texas will have to go unbeaten for the rest of the season.

To do this, the Longhorns need to put the loss at Baylor behind them and get their serve-and-pass game back on track.

Texas’ first opportunity to correct their serving will be at Gregory Gym on Thursday and Friday night, where the team will take on Oklahoma. If Longhorns, such as Eggleston and sophomore outside hitter Melanie Parra, can serve aces and throw the Sooners out of rotation, Texas could add two sweeps to the 12 it’s accumulated over the season.