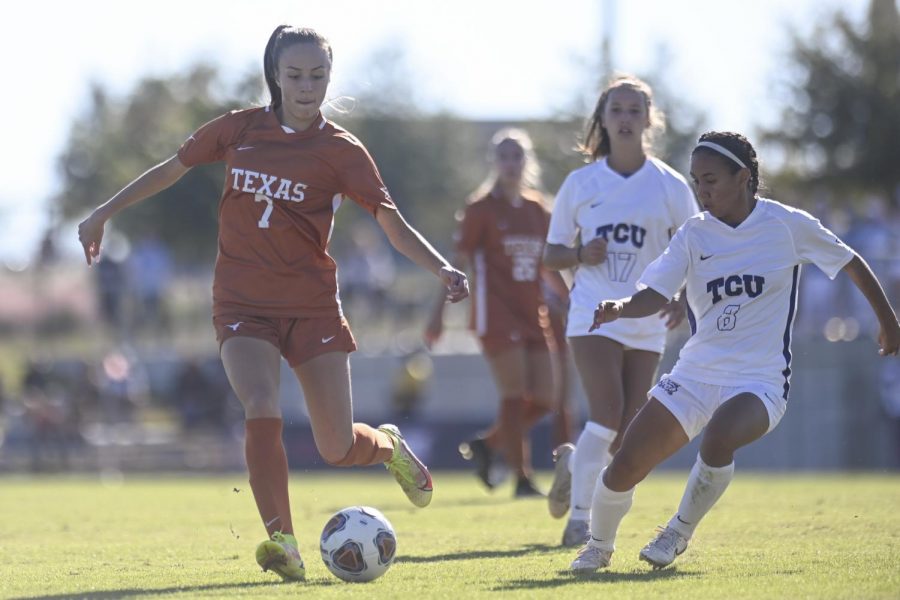 On a windy and rainy night at Rock Chalk Park in Lawrence, Kansas, the No. 20 Longhorn soccer team defeated the Jayhawks 2-0, breaking records and surpassing personal milestones.

Texas soccer finished the Big 12 regular season undefeated for the first time in program history while also giving head coach Angela Kelly her best conference finish in her 10th year in charge of the program.

The first half of the match saw both squads struggling to get things going. The Longhorns managed to get off 10 shots, but none of them were ever expected to hit the back of the net as the Jayhawk keeper made easy saves.

It was apparent coming out of halftime that Texas was pushing to get on the scoreboard. The Longhorns generated some of their best opportunities of the contest in the first few minutes.

Freshman forward Trinity Byars got the Longhorns on the board at the 48-minute mark. Receiving the ball at the top of the box, Byars spun around as she dribbled toward goal.

With a defender trying to bring her down and the goalkeeper standing right in front of her, the freshman forward sent a powerful shot into the back of the net as her teammates celebrated with her.

Keeping the momentum high, the Longhorns came back quickly in the 56th minute to find the back of the net but this time through build-up play.

Senior defender Cameron Brooks carried the ball up past midfield as she looked for a teammate to connect with. Brooks found freshman forward Holly Ward, who was making a darting run past the back line toward the corner flag, as the two linked up seamlessly.

Ward kept her momentum, taking a touch before sending a winding ball into the box that was met by fellow freshman forward Lexi Missimo. With a defender on her back, Missimo sent the ball past the keeper with a one-time touch to give Texas a 2-0 lead.

In the 72nd minute off a free kick, fifth-year goalkeeper Savannah Madden had to make an athletic save to keep her ninth clean sheet of the season. Madden had to stay locked in on the ball, not only because it was winding but because of the high winds that impacted its flight.

As the ball came close to the goal, Madden backpedaled and launched herself in the air, deflecting the ball over the top of the crossbar.

In the closing minutes of the game, the Longhorns weren’t trying to create chances but rather stop Kansas from getting on the scoreboard. This strategy ended up working in the end as Texas defeated the Jayhawks 2-0.

A good mixture of young talent and veteran experience helped the Longhorns accomplish a record never previously met. Texas began the season 4–3–2 before turning things around to not drop a game during conference play and finishing the regular season 10–3–5.

The Longhorns are currently on a 12-game unbeaten streak as they get ready for Sunday when the conference tournament begins in Round Rock, Texas.

Kelly and team must be celebrating the program milestone, but will try to cross off another one: lifting the conference tournament title for the first time since 2007.