‘Tis the season for Christmas music — or is it? 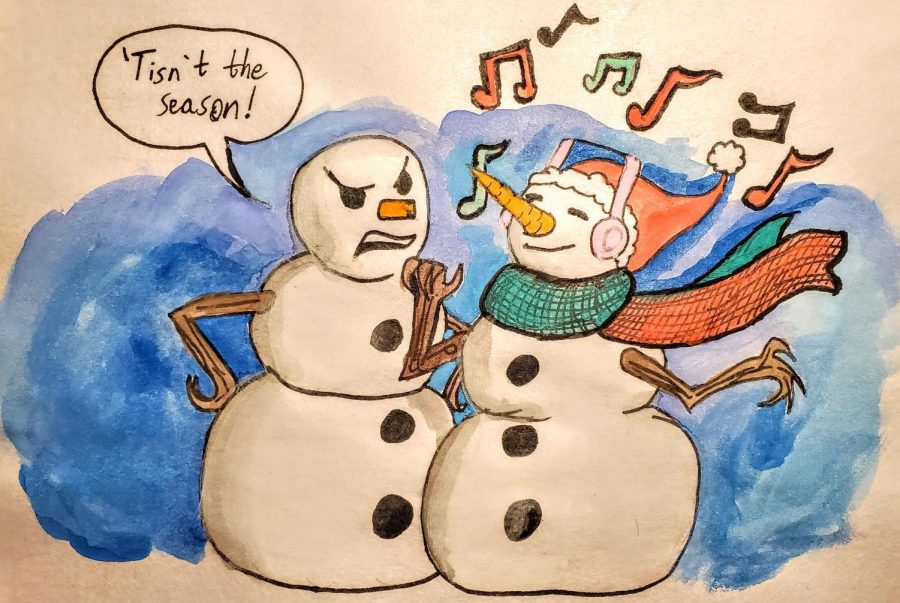 Shannen Dumadag remembers sitting on the carpet in her childhood bedroom, anticipating the winter season as the soft instrumentals of Mykola Leontovych’s “Carol of the Bells” played in the background.

“I very much tie Christmas music to my childhood and to a lot of good feelings,” public health senior Dumadag said.

Each year around early November, an age-old debate resurfaces about the appropriate time to begin listening to holiday music. Some students choose to start blasting holiday soundtracks now, while others wait until it’s deeper into December.

For Dumadag, listening to Christmas music early in the year ties into her cultural background. Dumadag said in Filipino culture, the Christmas season begins in September.

“I used to live in the Philippines so it was very much normalized for Christmas music to be switched on the radio super early in the year,” Dumadag said.

Although Dumadag enjoys holiday tunes early, she said her friends don’t share the sentiment. In fact, their opposing views became a running joke between her and her roommate.

“I’ll start playing Mariah Carey’s ‘All I Want For Christmas Is You’ as soon as Halloween is over, and (my roommate) will try to take the remote,” Dumadag said. “It’s definitely like a lighthearted argument between close friends.”

Laura Davis, applied learning and development sophomore, said she used to indulge in Christmas music after Halloween, but now waits until after Thanksgiving.

Davis worked at Hallmark, where they celebrated Christmas in July, but she said she didn’t enjoy constantly hearing Christmas tunes in the summer. The sweltering weather threw her off because she associates holiday music with wintertime.

But even now, Davis still doesn’t want to listen to holiday music quite this early. She said waiting until after Thanksgiving makes listening to Christmas music more special for her.

“When I was around 15, by Christmas I was just so tired of listening to (Christmas) music,” Davis said. “I was just not even excited for Christmas.”

With a smaller window to listen every year, Davis said she appreciates Christmas music more.

“The anticipation is half the excitement of Christmas,” Davis said. “It’s more exciting if you wait a little longer.”

Jackie Cheng, international relations and global studies and sociology sophomore, said she never tires of Christmas music because of its versatility. She said she enjoys music selections from calming instrumentals to pop ballads, such as Justin Bieber’s “Mistletoe.”

“Christmas music covers such a large variety of genres and different moods that I don’t think you can get sick of it,” Cheng said.

By playing Christmas music earlier in the year, Cheng said she gains the same warm emotions of the holidays that she feels when celebrating with her family.

“There’s a novelty to Christmas music,” Cheng said. “The way it’s made … the mood it sets, you can’t really get tired of it.”