Breaking down No. 1 Gonzaga men’s basketball with The Gonzaga Bulletin 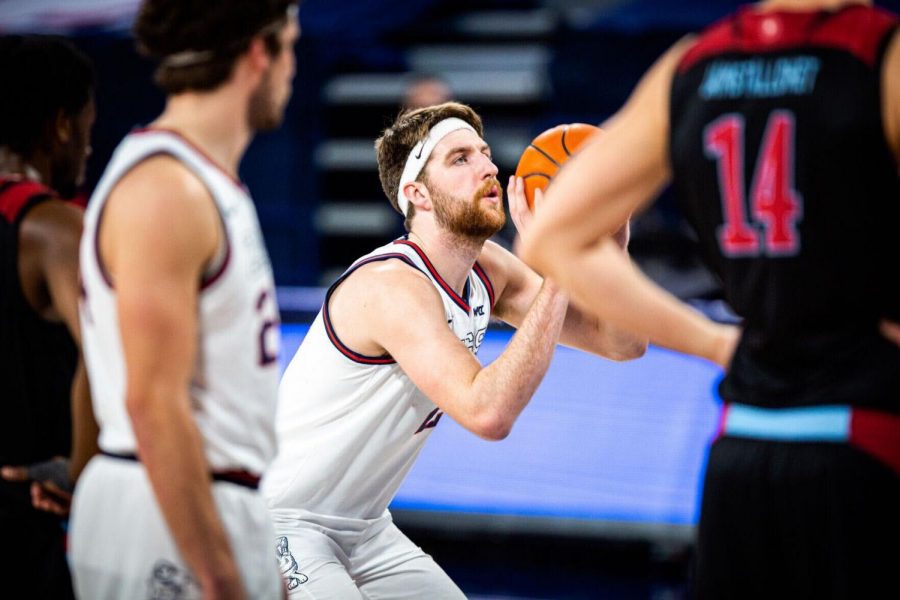 The Daily Texan spoke to The Gonzaga Bulletin’s sports editor, Cole Forsman, to get a better understanding of what Texas men’s basketball is going up against in its most exciting non-conference matchup of the season.

The Daily Texan: Could you give me a general rundown of the Gonzaga program for Texas fans who may not be super familiar with it?

Cole Forsman: I’m sure everybody knows (they were) last season’s runner up (and) one game away from being undefeated. So this team’s goal is definitely to get back to where they were. It doesn’t have to be undefeated, of course. The Zags don’t take anything for granted. They don’t take any conference game for granted. They come in to handle their business like they’re supposed to come to you and they try to load up their non-conference schedule as best as they can.

DT: What do you think has contributed to Gonzaga’s consistent success?

CF: Every athletic department strives to have a family-oriented environment, but from the top down, it’s always about finding the best fit for the team and for the culture. (Gonzaga) gets seen a lot in the recruiting process, and now they’re starting to get five-star recruits. But before that, consistency was just built on guys who knew their role, and they all bought into what (head coach Mark) Few preached. It’s just consistency and terms of leadership. I think that’s a big one.

DT: Talk to me about five-star freshman Chet Holmgren, who Texas head coach Chris Beard compared to Kevin Durant. What do you expect to see from him on Saturday?

CF: Chet will find this footing; I think that’s what these first couple of games are. I was watching him against a couple of exhibition opponents, and he is still a freshman. He is a five-star recruit, but he is still a freshman playing (his) second collegiate game on Saturday. It’s a mental thing as much as it is a physical thing with Chet. So going forward, of course he is the No. 1 recruit in the nation (and) he will have those games. But for the most part, I think we will still see a lot of growth for him as the season goes along.

DT: Tell me about Drew Timme and what he’s bringing to the table as one of Gonzaga’s returners from last season.

CF: I actually expect him to be more aggressive from behind the 3-point line. He’s not afraid to shoot outside anymore. Last year, he was really hesitant to do that. (But) he wasn’t really asked to do that last year. This year, Chet (Holmgren) helps space the floor with his 3-point ability, but Drew (Timme) knows that if he wants to make that next jump to the NBA, (then) it’s all about spacing. I expect the same old Drew Timme as far as his footwork on the block. It’s unreal for a college basketball player. But now I think he’ll be able to stretch the floor or at least (be) more aggressive from the outside, which I think could add a huge element to his game.

DT: What elements of this Texas team might make it difficult for Gonzaga to secure a win?

CF: I think Devin Askew gives Texas an added element (since he) came over from Kentucky. He (was) obviously a really talented freshman coming out of high school. The senior leadership — I think that’s huge. Timmy Allen, Andrew Jones (and) Marcus Carr are all seniors, especially in those guard positions where the more experienced guard is more bound to make the smart play. (With) Gonzaga, like we’ve mentioned, Drew Timme and Andrew Nembhard are two guys that are returning key pieces from last year. But outside of that, (it’s) Chet Holmgren, Hunter Sallis and all these guys (who) are freshmen. (Texas’) experience can’t be understated. There’s a lot of upperclassmen on the roster that have been in big games before. It’ll be interesting to see how they handle an environment like Gonzaga.