UT South Asian a cappella group bounces back after COVID-19 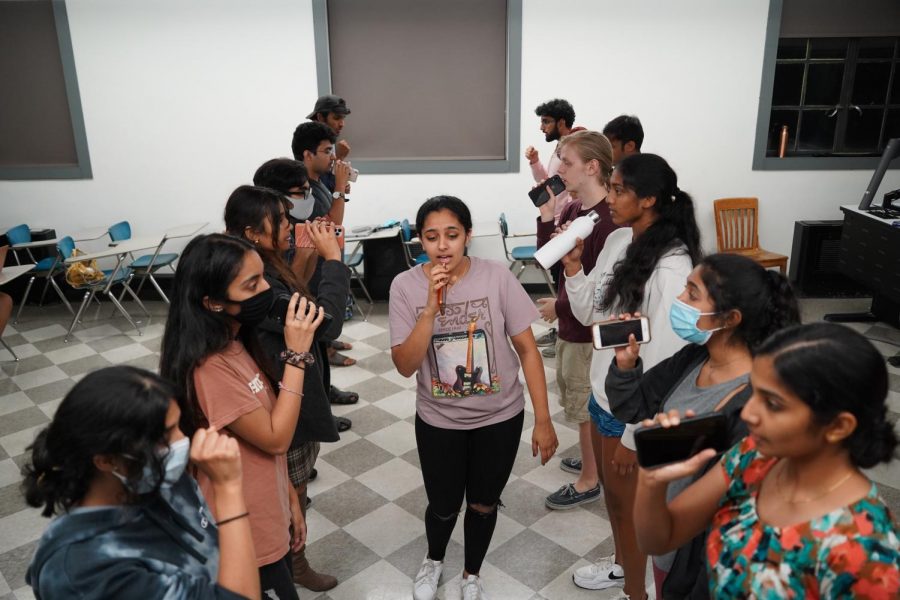 With phones and water bottles held to their lips like microphones, the members of Hum A Cappella moved with their own fluidity and intensity while still in sync with one another. As the space filled with a combination of rich harmonies, intricate musical lines and choreographic side comments — making quick changes here and there — the group took their first rhythmic steps toward returning to Sangeet Saagar nationals.

Hum, a UT student-led South Asian fusion a cappella group, creates, scores and writes all of the choreography and music. Unlike other a cappella groups on campus, Hum integrates South Asian literature, music theory and culture into their repertoire.

Most members of the primarily South Asian group grew up listening to the same kind of music Hum performs. For them, their group’s unique sound holds a special place in their hearts, connecting them to one another.

“I grew up in a primarily white neighborhood and community, so I wanted to have an Indian community that appreciated South Asian music like I did,” Chunangad said. “Having that in college is really great.”

As a tight-knit community, the members said the COVID-19 pandemic hit the group hard. They mostly met over Zoom and couldn’t rehearse in person. To make matters worse, they had to cancel all live performances and competitions.

“It was really, really tough,” Chunangad said. “The part of the group that I really love is being able to be in the same place as all the other members, sing together and make music together. The pandemic really made that sort of impossible.”

Though they couldn’t compete live, most events still took place virtually. For competitions, groups sent in videos of members singing alone and hired professionals to mix and edit them. Many Hum members felt the format removed the music’s authenticity.

“The magic of a capella was lost,” Aggarwal said. “That’s not what a capella is. (We) couldn’t really get a capella back until we could meet in person. Every time now, whenever I come back to practice, I’m more thankful that I just have the chance to sing with my team members.”

With protocol starting to return to normalcy, the group now meets in person and will prepare for frequent in-person performances and competitions. Hum hopes to win two big competitions this year, as well as achieve victory at nationals. Math and neuroscience senior John Mustin said he feels ready to be on stage with Hum and make music together once again — the true magic of a cappella.

“There’s something really special about being able to hear this amazing sound me and my 15 friends just made,” Mustin said. “If you’re on stage, you know there’s not even the help of an instrument. It’s all just from the soul. Every single bit of that was us.”