No. 2 Longhorns sweep rival Sooners in bounce-back win after first loss of season 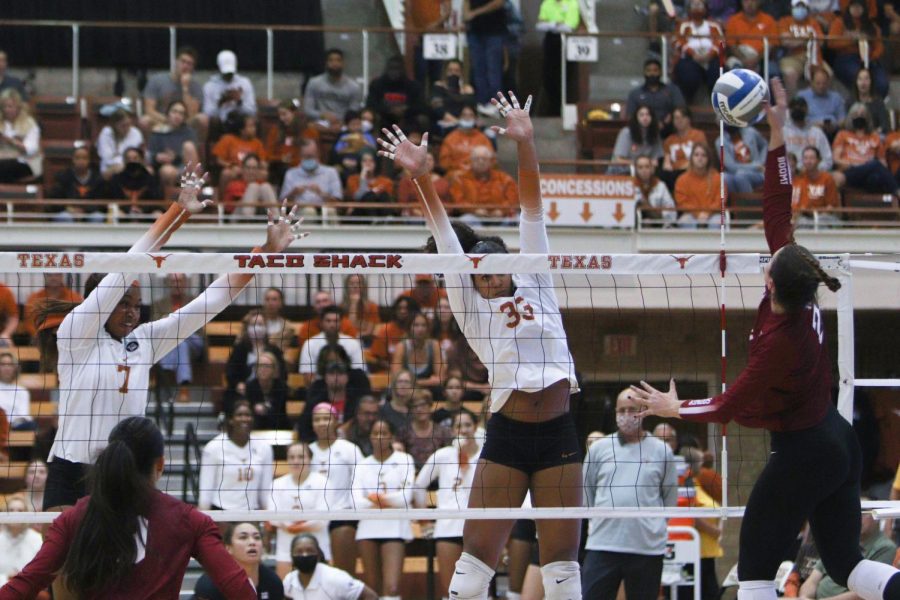 Longhorn fans welcomed the Texas volleyball team back to Gregory Gym on Thursday with a full house, constant chants and sea of “hook ‘em” signs after almost a month away from home and their loss to Baylor on Saturday.

Against rival Oklahoma, No. 2 Texas had no plans to repeat Saturday’s errors. The Longhorns beat the Sooners 3-0 on Thursday night, after a first set that presented some service error issues.

“We have really competitive women that care a lot,” head coach Jerritt Elliott said. “They wanted to get back, and they know that nothing is broken; it was just a tight match.”

In set one, junior Logan Eggleston showed just how she earned Big 12 Offensive Player of the Week in the first point of the match, starting the Longhorns off with a kill from the left corner. While the first set from Texas was not their cleanest — the Longhorns suffered seven service errors — strong performances by veteran players pulled them to a 25-22 victory. Senior middle blocker Brionne Butler hit Oklahoma with five kills in the first set with a .833 hitting percentage. Eggleston led the team with 18 kills in the match.

“Logan … carries a big load because she’s playing six rotations for us,” Elliott said. “She’s starting to play at a high level right now. It’s coming at the right time and we’re excited about it.”

In the second set, Texas established a strong start with a 10-point lead over the Sooners. But a six-point scoring streak by Oklahoma pulled them back into the set. After a timeout by Elliott, the Longhorns regained control of the match with a second wide lead, 25-14. Texas also gained some control back on serves, with only three service errors in the second set.

Nalani Iosia and Eggleston lead the Longhorns with two service aces a piece. Melanie Parra, often one of the strongest servers in the country, had no service aces in the first two sets and three service errors, but pulled out one service ace before the night ended. Texas accumulated 11 service errors and seven aces throughout the match.

“(Service errors) were all game one,” Elliott said. “The rest of the match it was pretty clean, so I was good with it after that. (In) game one, we just didn’t come out controlling the ball at that level, and that’s why the game was close.”

By set three, Texas was in control. Junior transfer setter Saige Ka’aha’aina-Torres got her chance on the court and responded with five block assists. While Oklahoma responded with a few strong volleys, Texas held a comfortable lead. The Longhorns put down the Sooners 25-13 by the end of the night, winning the match in a sweep.

Junior middle blocker Molly Phillips said that after the Longhorn’s loss last week and a move to No. 2 in the rankings, the team refocused.

“I think a loss always creates a sense of urgency and ignites us to go into the next day and get way better,” Phillips said. “But we know that rankings aren’t everything and if we get knocked down to (No. 2), it’s okay. It’s not the end of the world.”

Before the match, the crowd recognized Jerritt Elliott, with 523 wins, as the winningest coach in Texas volleyball history.

“It just means I’ve been here for a long time, and I’m getting older,” Elliott said. “I’m just the face of it all. My coaching staff does such a great job, … and I’ve been fortunate because these young women come and decide to play at Texas and represent what we have here. So my goal is to keep it going.”

Tonight, Elliot achieved his goal, bringing his total number of wins to 524.