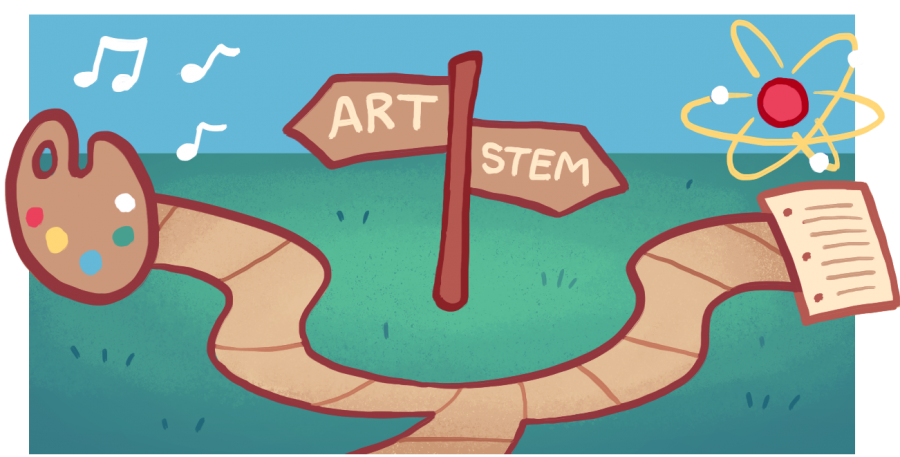 While auditioning for “So You Think You Can Dance” in 2012, Jarell Howard Rochelle felt everything click into place as his mother watched him from the judges’ table. After struggling through his undergraduate years not knowing where he fit in, Rochelle said dancing for his mother served as the reassurance he needed to continue following his passion for dance.

“As you keep going, (your path is) just going to keep unfolding for you,” graduate student Rochelle said. “The light will shine on everything else that you couldn’t explain in the process.”

The term “starving artist” — meant to encapsulate creatives who sacrifice their money and well-being to pursue art — push many away from an unpredictable arts career. While some UT students find themselves drawn to the “starving artist” lifestyle and switch majors to pursue their passions, not all feel comfortable exploring this route.

Since age 13, Rochelle said all he wanted to do was dance. However, his parents said they would feel uneasy if he didn’t have a secure 9-to-5 job. Despite their pressure, Rochelle said he continued with dance, ignoring the term “starving artist” because he could never “starve” or feel empty with dance.

“Switch your adjective from ‘starving’ to ‘fulfilled,’ because you’re following your passion and your gifts,” Rochelle said.

Since switching her major from architecture to art education this semester, sophomore Valerie Aldana said she’s finally learning about topics that excite her.

“If it’s your passion, your life’s going to be so much more full,” Aldana said. “If you don’t see yourself doing it for a lifetime, you’re selling yourself short.”

Growing up with her grandma, Aldana said she was pressured to pursue a lucrative, secure career as a doctor or lawyer. However, Aldana said she didn’t want to keep trying to please everyone else.

“You only live one life,” Aldana said. “You might as well do what you want. Be happy and starve or be super rich and unhappy.”

However, not everyone feels they have the room to be passionate or explore.

Undeclared freshman Nayeli Rivera, who’s on the premed track, said she grew up knowing she would follow in her parents’ footsteps. With a radiologist father and an ultrasound technician mother, Rivera said she feels pressure to follow their advice, but wishes she could explore other career fields.

“(My parents) don’t want something that will make me happy,” Rivera said. “It’s more like: What can give me a stable life in the future?”

Rivera constantly thinks about her uncle, who went to art school but eventually pursued medicine. Rivera said her parents constantly refer to him as an example of why she shouldn’t study art.

“It didn’t work out for him, so they think that I’m just going to waste time if I do something that I like or (is) fun to do,” Rivera said. “It’s not a guaranteed paycheck.”

However, Rochelle said pushing through and following your inner voices should be the most important influence.

“You don’t make up your calling,” Rochelle said. “There have been starving artist nights, don’t get it twisted. … But until you go and allow yourself to explore that (calling), you’ll never actually be living.”