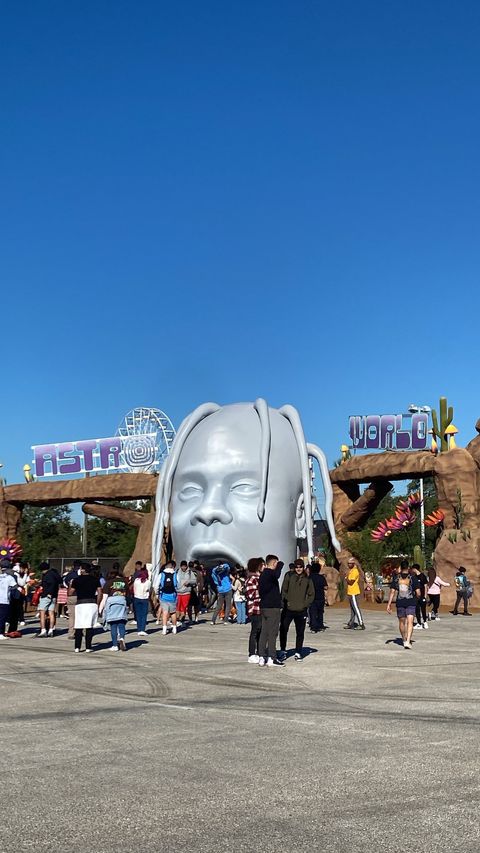 Eager to dance and sing surrounded by a vibrant audience, avid concertgoer Juliana Vargas waited at the barricade for Travis Scott. Fifteen minutes into the set, she said she knew she had to leave.

Squeezing through the tight, chaotic crowd with a teenage boy who helped keep her from fainting, Vargas finally escaped the mob 30 minutes later.

“People would just fall, tripping over people on the ground,” informatics sophomore Vargas said. “(There were) mountains of people on top of each other because it was hard to get back up. I saw people reaching out, and you couldn’t help them because then you would fall.”

On Nov. 5, a crowd of around 50,000 fans arrived at NRG Park in Houston for Travis Scott’s Astroworld Festival. The exciting concert quickly turned into a struggle for air as bodies packed together like sardines — a crowd surge. A violent audience, incited by Scott’s music, left nine people dead, hundreds with injuries and several in critical condition. Since attending the festival, some UT students still must process their experiences and the gravity of the situation.

Though pushing through the crowd felt like a blur, Vargas said she feels grateful for the boy who helped her and said she couldn’t have left without him keeping her upright. Vargas said people pressing on each other made her repeatedly trip up and almost fall.

“I left the festival crying,” Vargas said. “I really thought, at some points, that I was going to die. I didn’t think I was going to get out of there.”

Since Nov. 5, Vargas said she constantly checks for more news on social media, which only makes her feel more upset. However, she said it helps to talk through the event with her therapist, and she recommends others do as well.

“Ask me a day before that, he was my favorite artist. Ask me today, I never want to hear the man’s voice again. (It’s) literally traumatic,” Vargas said. “I had to go to therapy this morning to talk about it. I keep reliving it.”

Nutrition senior Antony Rodriguez attended Astroworld in 2019, but said this year’s festival felt much more disorganized and ill-planned from the beginning. Rodriguez said he didn’t understand the seriousness of the situation. Then he saw someone lying dead in the crowd.

“It wasn’t until I saw a person that passed away that I was like, ‘No one is coming. No one is doing anything,’” Rodriguez said.

Since the festival, Rodriguez has shared resources on his social media and said people need to continue to be aware of the situation.

“(Sharing resources) is helping the people that passed away and honoring them because they just went to have fun, and this happened,” Rodriguez said.

Although Hannah Garcia was toward the back of the crowd, the humanities and government senior said she still felt the chaotic energy as the artist encouraged his audience to “rage” and “go crazy.”

Garcia said people need to continue to talk about the tragedy and hold Scott accountable.

“It’s such a shame,” Garcia said. “No music festival’s worth dying over. No one should lose their life at something that’s meant to bring people together.”

Garcia said she recommends other students who attended Astroworld to request accommodations and take time to heal mentally and physically.

“Even if nothing physically happened to you, that doesn’t invalidate your experiences,” Garcia said. “This was a really traumatic event that could have led to even worse things, so it’s OK to not be OK.”