Texas claws back to force OT, but Kansas wins in Austin for first time ever 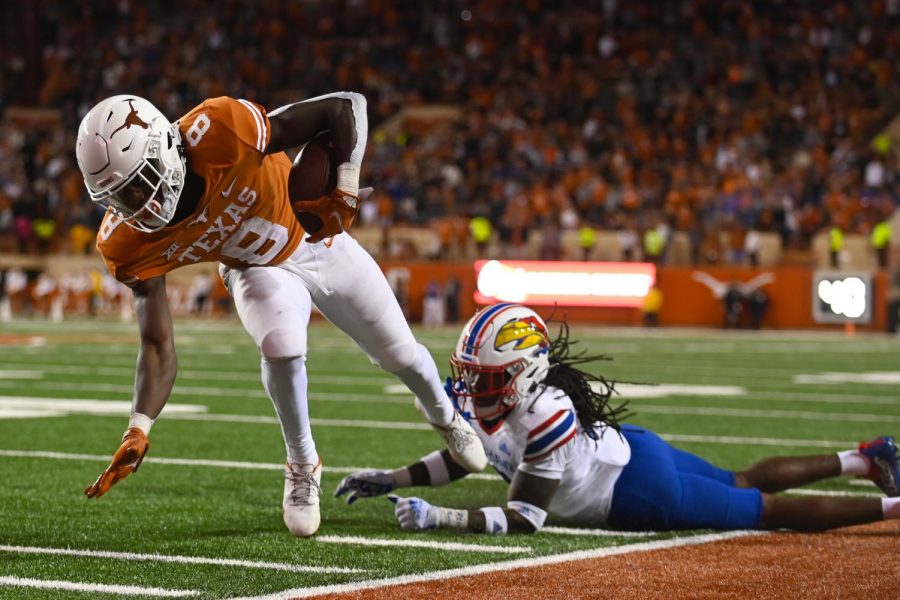 There will be books written about this Texas football season.

This horrible, unbelievable, train wreck of a season featuring five straight losses for the first time since 1956.

But this loss wasn’t to Oklahoma, or to Oklahoma State, or to Baylor, or to Iowa State. This loss was to Kansas. The 1-8 Jayhawks rolled into Darrell K Royal-Texas Memorial Stadium on Saturday and escaped with a 57-56 win in overtime against the Texas Longhorns.

Kansas’ opening 13-play, 75-yard touchdown drive was effortless. Then junior quarterback Casey Thompson was stripped, and the Jayhawks quickly put another touchdown on the board.

After four drives, Kansas had put up an easy 21 points. That was the thing. Kansas made it look easy.

A team with one win over the past two seasons, with that one win coming against Football Championship Subdivision-level South Dakota, made it look easy against the Longhorns.

But it wasn’t all due to Kansas’ execution. The Longhorns experienced their fair share of blunders that contributed to the 35-14 halftime deficit.

Card got his opportunity, connecting with freshman receiver Xavier Worthy for a 33-yard touchdown pass, but with the chance to cut into a 14-point deficit with a little over a minute left in the half, he threw a debilitating pick six that ballooned Kansas’ lead even further.

Then, on the ensuing kickoff, Jonathan Brooks picked a horrible time to make a freshman mistake, letting the kick bounce off him and scoot out of bounds at the 2-yard line.

“That’s one of the worst sequences that I’ve ever seen a team play that I’ve been a part of,” Sarkisian told ESPN as the Longhorns walked into the locker room at halftime.

The second half was a little better, but it ultimately wasn’t enough.

Thompson did come back and led the Longhorns on a determined 10-play, 65-yard touchdown drive to open up the second half, but the Jayhawks quickly responded with an equally efficient touchdown drive of their own to keep Texas at arm’s length.

While a string of three straight three-and-out drives from Kansas and a blocked punt allowed the Longhorns to creep back into the game, Texas’ defense had no answer for the Jayhawks’ ground attack overall. Defensive line coach Bo Davis’ infamous rant after the blowout Iowa State loss seemingly did not do the trick at inspiring a unit that gave up 218 rushing yards to Kansas on the night.

“Defensively tonight, we didn’t play anywhere near our capability,” Sarkisian said after the game. “At some point, we’ve got to put it all together, and that’s our job. That’s my job. … I have to find a way to tap into these guys to get them to understand what it takes to win.”

The Longhorns struck first in the extra period with another Thompson touchdown pass, this one to Marcus Washington. But the Jayhawks responded with one of their own and decided to go for the win with a two-point conversion.

After being forced from the pocket, Kansas sophomore quarterback Jalon Daniels found his fullback Jared Casey in the end zone for a successful try.

The Jayhawks walked off with their first-ever win in Austin.

Texas now sits at a meager 4-6 on the season with two final games to play. The Longhorns will need to win both if they hope to earn an appearance in a bowl game. But even if that does happen, will it have been deserved?