Texas volleyball shows up to show down at Red River Rivalry, wins 3-0 on Saturday with double sweep over Oklahoma 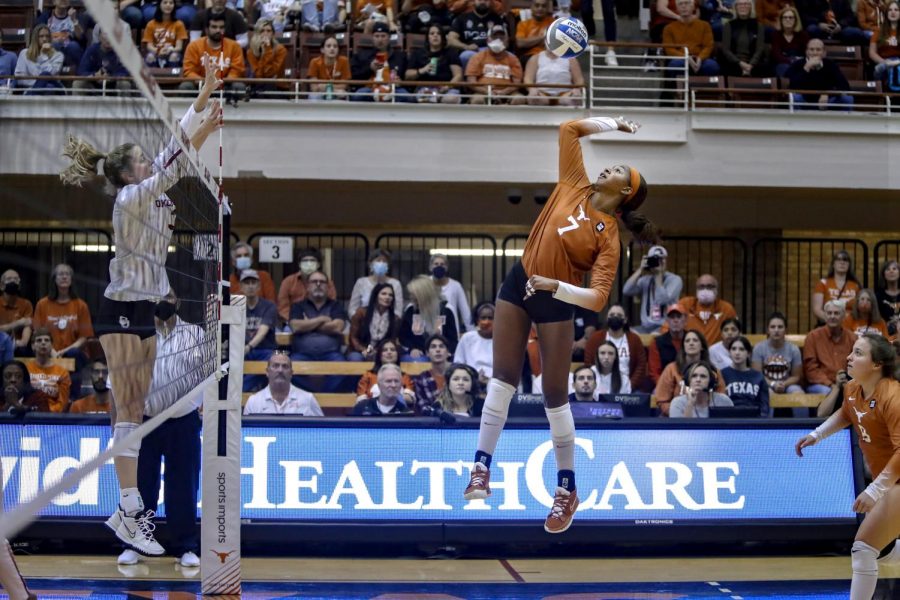 After suffering its first loss of the season against Baylor last Saturday, No. 2 Texas volleyball made sure to come in with a double sweep this weekend in the Red River Rivalry.

In their second match against unranked Oklahoma, the Longhorns wiped out the Sooners with a 3-0 flush, courtesy of strong performances by juniors Skylar Fields, Asjia O’Neal and Logan Eggleston.

“I think we definitely bounced back from yesterday. I don’t think yesterday was our best game,” Eggleston said. “Last night, we were missing a few too many serves, and tonight we were putting really hard, aggressive serves on them.”

Starting off the first set with a kill by O’Neal, the Longhorns kept their guard up with five blocks, three of them being block assists from O’Neal. Texas served up 10 kills and an easy 25-8 win over the Sooners.

Senior middle blocker Brionne Butler accumulated a .667 hitting percentage, the highest out of all the players for the set. Oklahoma put up an impressive fight to keep the ball off the ground but couldn’t seem to get it past the net successfully, with eight attack errors and only a -.147 hitting percentage.

“I think Asjia (O’Neal) did a really good job of blocking and establishing that early when things got really frantic,” Eggleston said. “She really stepped it up at the beginning and started us off super strong.”

Set two was a game of cat and mouse for the rivals, but the Longhorns quickly took the lead, coming out with a tight score of 25-21. The Sooners closed in on the Horns toward the end of the set, with the two sitting at a 22-20 score.

Despite Oklahoma’s freshman powerhouse Megan Wilson bringing six kills to the court, the Sooners were no match for the Longhorns’ momentum. With only two service errors in the set and multiple kills by Eggleston and junior Molly Phillips, Texas secured another win.

Fields dominated the court during the second set, delivering six kills and proving herself worthy of the front row throughout the match, totalling a whopping 12.5 points for the game, the second most points  behind O’Neal.

“(Fields) just keeps getting better and better,” head coach Jerritt Elliott said. “I think her attack selection is getting better, I think she understands how defenses are playing and she’s showing up and playing really well.”

To finish out the night, the third set began the same way much of the game had gone: with a kill from Fields. With each point closer to the sweep, the crowded bleachers of Gregory Gymnasium erupted in cheers.

A last minute Sooner comeback fell short with three attack errors and three service errors as Texas handed Oklahoma its 14th loss of the season. The Longhorns took a 10-point lead and eventually secured the sweep with a 25-14 score for the third set.

“It’s always really fun to play OU just because of that rivalry, and we just played with a lot of joy tonight, which sometimes is hard to do in tough situations,” Eggleston said. “The crowd plays a big factor in how we play and how we build that energy.”

The team will play its next matches at home against Kansas State next Thursday and Friday.