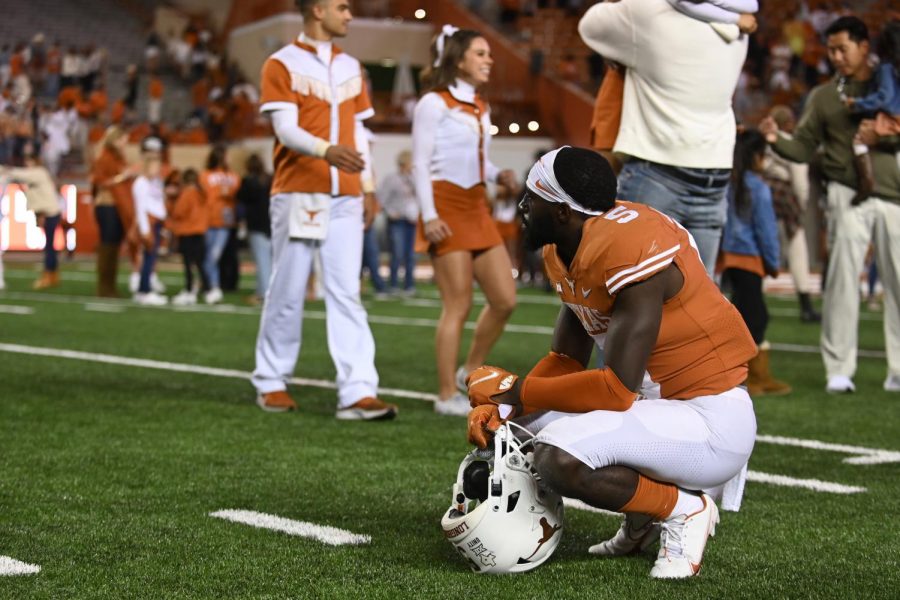 Saturday’s game was viewed as a chance for Texas to work through some of its issues and get back to what made the team successful early in the season. Instead, the Longhorns found a way to make a disappointing season much, much worse.

Xavier Worthy deserves to be recognized on a national level

One of the few glimpses of hope in an otherwise disastrous season is the breakout of freshman receiver Xavier Worthy. The speedster broke Roy Williams’ record for receiving touchdowns by a freshman on a 33-yard touchdown pass from redshirt freshman quarterback Hudson Card. Worthy clearly wasn’t 100% as he occasionally could be seen limping after plays, but he played through it and caught a career high 14 passes for 152 yards and three touchdowns.

Worthy has been a security blanket for redshirt junior quarterback Casey Thompson all season, and will be relied on even more moving forward with the transfer of junior receiver Joshua Moore and injuries to redshirt sophomore receiver Jordan Whittington and star sophomore running back Bijan Robinson. A lot of things have gone wrong for Texas this year, but the emergence of Worthy is something head coach Steve Sarkisian can build on moving forward.

Texas has struggled to get stops in big spots all season. With an opportunity to stop the Jayhawks on a two-point conversion and potentially save their season, Kansas sophomore quarterback Jalon Daniels was able to escape the pocket and find a wide open receiver, ending the game and stunning the home crowd.

Kansas came into Saturday not having scored more than 33 points in any game this season. The Jayhawks went into the locker room at halftime with a 35-14 lead. Their offensive line tossed around the Texas defensive front from the first drive as Kansas ran for 218 yards, 143 of which came from freshman running back Devin Neal, who also found the end zone three times. Daniels tore the secondary apart on third down, converting on 11 of 17 attempts. His ability to extend drives in third-and-long situations gave the Jayhawks a massive advantage in time of possession. Defensive coordinator Pete Kwiatkowski tried to throw a series of different zone coverage looks at Daniels, but nothing worked. The young quarterback was poised all night, making just enough plays to leave with a win.

Each level of the defense has been incredibly underwhelming from a fundamental standpoint. Basic concepts such as gap discipline and tackling seem to be incredibly difficult for the Longhorns. This lack of execution is on the coaching staff as much as the players. At some point, someone needs to be held accountable.

From disappointment to embarrassment

In their fifth game of the season, the Longhorns at one point held a 38-20 lead over rival Oklahoma. The offense was clicking on all cylinders. Casey Thompson looked like he was the answer at quarterback. Sarkisian looked like the offensive guru that led Alabama to a championship the year prior. Texas finally felt like it was “back.” Five and a half games later, the Longhorns could miss out on bowl eligibility for the first time since 2010.

For a program that consistently fails to live up to expectations, this loss represents the ineptitude of the Texas program over the past decade to capitalize on all the resources that made it great. Charlie Strong, a former Longhorn head coach, had his tenure as Texas football’s head coach fall apart following a disappointing loss to the Kansas Jayhawks. Only time will tell if Steve Sarkisian is destined to suffer the same fate.