No. 25 Texas takes down No. 3 Stanford in 61-56 upset behind late-game heroics of Aliyah Matharu 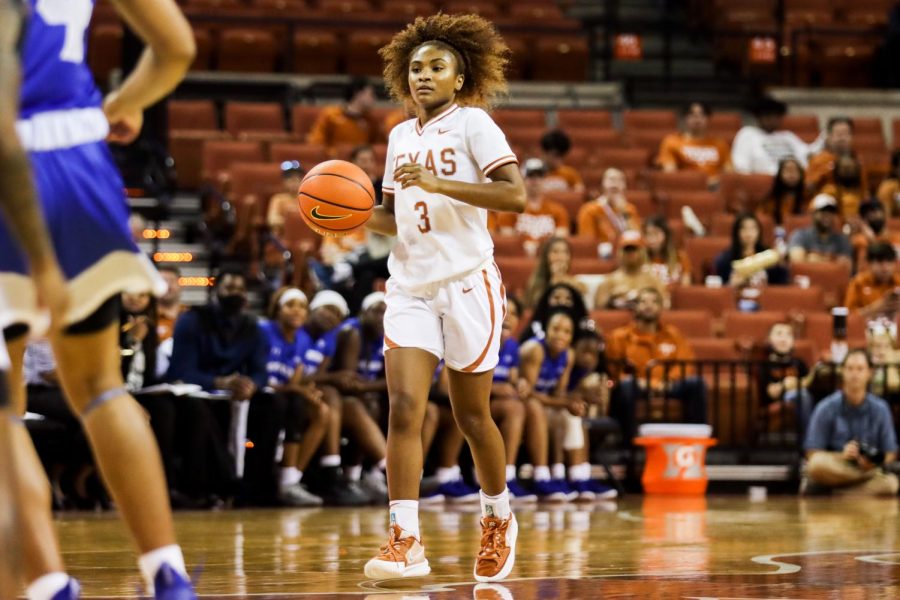 Junior guard Aliyah Matharu had already hit three big 3-pointers in the fourth quarter, so it was only right that the dagger play would go to her. With almost only two minutes remaining, No. 25 Texas was on the verge of a huge upset against No. 3 Stanford, leading 53-48.

Matharu dribbled the ball quickly as she looked for the best opportunity to hit a shot. She stepped back, pulled up and hit a clutch 3-pointer with just 1:39 remaining on the clock to give Texas a 56-48 lead. The crowd at Stanford Maples Pavilion quickly grew silent as reality settled in that the Longhorns would upset Stanford on the road, 61-56 behind Matharu’s late-game heroics.

Sunday wasn’t the most efficient game offensively for either team. The Cardinals and Longhorns both shot under 40% from the field, but defense was on display all afternoon.

Texas held Stanford to just 25 points in the first half as its defense kept the Longhorns in the game despite a struggling Texas offense.

Senior forward Audrey Warren was a problem for Stanford on defense. Constantly shifting her feet and getting into position to draw a charge, Warren accounted for a handful of the Longhorns’ 20 total forced turnovers with her ability to beat Stanford to the ball. Although Texas’ defense was the star of the first half, it was the offensive play in the second half that allowed the Longhorns to pull away from Stanford.

Freshman guard Rori Harmon led the way in scoring for the Longhorns with 21 points. She was consistent throughout the game with her scoring as she attacked the paint at will and hit tough shots from mid-range.

Even on a day where the offense struggled, Harmon showed head coach Vic Schaefer that the team can count on her to control the tempo and score when her team needs a spark.

As great as Harmon was throughout the game, it was Matharu who came in as the hero for Texas in the fourth quarter, hitting all four of her 3-pointers in crunch time to help pull away from Stanford. The junior guard ended the night with 17 points and shooting 5-10.

Something about the Cardinals has brought out the best of the Longhorns’ defense in their past two meetings. In their last matchup in December 2019, the unranked Longhorns came in as the underdogs against then-No. 1 Stanford. But it was Texas who had prevailed behind their fierce defense, holding the Cardinals to just 32% shooting from the field.

The 2021 version was the same story, as the Longhorns shut down Stanford from the field and forced many errors behind their tough full-court man-to-man defense.

Texas will look to carry its momentum to Wednesday as it faces an unranked Southeast Missouri squad.