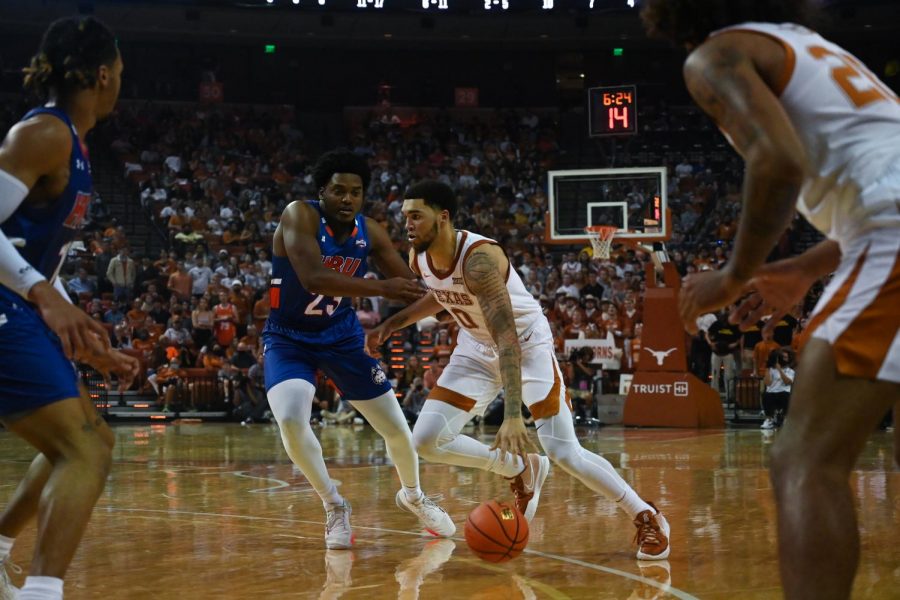 No. 5 Texas rolled into The Kennel on Saturday night hoping to hand No. 1 Gonzaga its first home loss since 2018. Then, in the opening minutes in Spokane, Washington, the Bulldogs sprinted away with the lead and never looked back in a 86-74 win over the Longhorns.

Junior forward Drew Timme immediately opened up scoring for Gonzaga with a wide open layup, setting the scene for Texas’ defensive struggles. The Bulldogs scored over half of their 86 points in the paint as the Longhorns left open paths to the basket early and often.

Texas head coach Chris Beard was not pleased with the initial defensive performance that allowed Gonzaga to run away with the lead.

“We couldn’t have played any worse defensively (than we did) in the first four minutes of the game,” Beard said.

The scoreboard read 11-5, Gonzaga by the end of the first four minutes of the game, as Texas held the lead for just 11 seconds before trailing by 20 points at halftime.

Timme, one of college basketball’s best players, scored a career-high 37 points against the Longhorn defense lacking the height and size to match up with the 6-foot-10-inch, 235-pound center.

But despite being outscored in the paint and allowing Timme to score nearly 40 points, there were moments of solid play for Texas on Saturday.

Senior forward Timmy Allen scored a team-high 18 points on an efficient 7-12 shooting along with six rebounds. In the second half, Beard made defensive adjustments and shots began to fall, allowing the Longhorns to go on a brief 7-0 run. Texas shot 3-13 from the three-point line in the first half and 6-11 in the second half.

Down 20 points at halftime, the run would cut Gonzaga’s lead to 77-66. But one scoring run just wasn’t enough. The Bulldogs would then score the next seven points to clinch the win in a top-5 ranked matchup.

Texas fell to 0-12 in matchups against No. 1-ranked teams and 0-4 against Gonzaga. Despite the loss in the highly anticipated matchup, the Longhorns have time to improve before conference play begins on New Year’s Day.

The Longhorns are still waiting for junior forward Dylan Disu to fully heal after knee surgery in February. The Vanderbilt transfer averaged 15.0 points and 9.2 rebounds in the 2020-2021 season.

Saturday night’s game was a solid test for the Longhorns to pinpoint where they need to improve to hold their ground against the college basketball giants. Winning against teams like Gonzaga is crucial to making deep runs in the postseason, and now Texas knows what it needs to fix to do exactly that: its slow defensive start.

Texas will have more than enough opportunities in its weak non-conference schedule to focus on what went wrong against Gonzaga — the Longhorns will not play another currently ranked opponent until No. 18 Tennessee visits Austin on Jan. 29.

The Longhorns are back in action against Northern Colorado on Wednesday night in Austin.